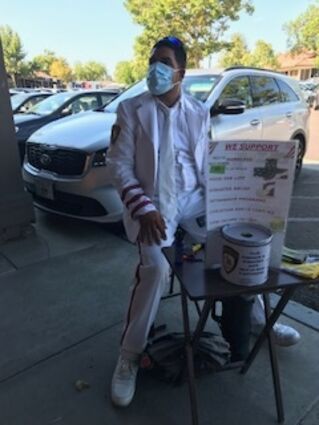 A man with the Church of the Disciples of Jesus Christ solicits funds outside Major Market.

A Fallbrook woman has launched a drive to let locals know she believes the people in front of Albertson's and Major Market soliciting donations are not someone to help. Instead, she suggests giving to local organizations.

The solicitors wear white uniforms similar in appearance to the Salvation Army workers.

"Church of the Disciples of Jesus Christ is about as opposite of the Salvation Army as possible, except for their costumes," Fallbrook resident Dr. Karen Dubrule claimed. "Other than these slick street whites, this group is not at all transpare...