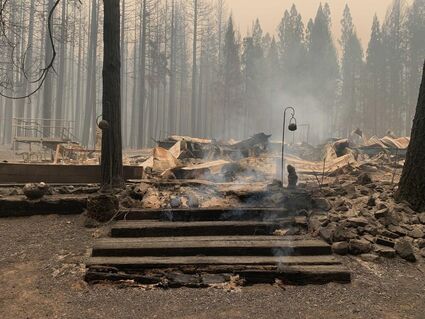 Smoke comes out under the front steps of a house that burned along North Arm Road in Plumas County near Taylorsville, California, Sunday, Aug. 15. Thousands of Northern California homes remain threatened by the nation's largest wildfire and officials warn the danger of new blazes erupting across the West is high because of unstable weather. (AP Photo/Eugene Garcia)

QUINCY, Calif. (AP) – Thousands of homes in Northern California remain threatened by the nation's largest wildfire as unstable weather creates a high danger of new blazes erupting across the West.

Weekend thunderstorms across the northern Sierras didn't produce much rain, instead whipping up winds and unleashing lightning strikes that bedeviled the more than 6,000 firefighters trying to contain the month-old Dixie Fire amid temperatures forecast to top 100 degrees (38 Celsius).