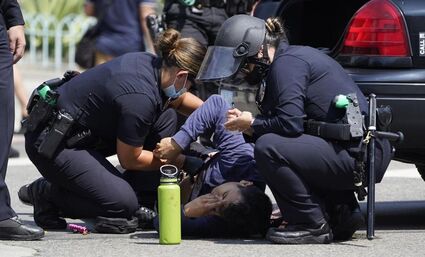 Los Angeles Police Officer Gutierrez, left, puts pressure on the open wound of a demonstrator, who was stabbed during clashes between anti-vaccination demonstrators and counter protesters during an anti-vaccination protest in front of the City Hall in Los Angeles Saturday, Aug. 14. A man was stabbed and a reporter was attacked Saturday at a protest against vaccine mandates on the south lawn of Los Angeles' City Hall after a fight broke out between the protesters and counter protesters, the Los Angeles Police Department and local media said. (AP Photo/Damian Dovarganes)

LOS ANGELES (AP) – A man who was stabbed when a Los Angeles protest against vaccine mandates turned violent has been released from the hospital, police said Sunday, Aug. 15.

The man was stabbed and a news reporter was kicked after a fight broke out Saturday between anti-vaccination demonstrators and counter protesters in front of Los Angeles City Hall.

The identity of the man with the stab wound was not released and no information was given about the extent of his injury, the Los Angeles Times reported.

No arrest has been reported in connection with the stabbing, o...