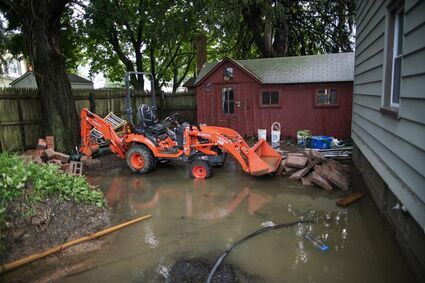 The backyard of a house is seen partially flooded during the passing of Tropical Storm Henri in Helmetta, New Jersey, Monday, Aug. 23. (AP Photo/Eduardo Munoz Alvarez)

The slow and sprawling storm system named Henri drenched much of the inland Northeast with rain Monday, Aug. 23, hampering cleanup efforts and threatening further flooding in areas with ground already saturated from a wet summer.

Rains from the storm, which spared coastal areas of New York and New England major damage when its center made landfall Sunday, Aug. 22, in Rhode Island as a tropical storm, deluged areas from New Hampshire to New York City and down to New Jersey and Pennsylvania.

Downpours and flooding were possible Monday in...