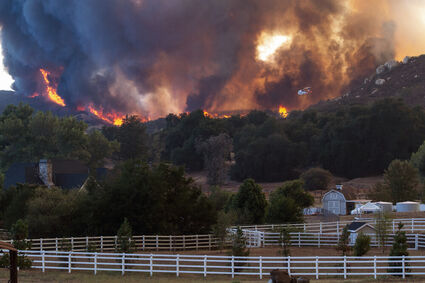 One firefighter suffered minor injuries and two structures were destroyed in a brush fire that broke out Saturday, Aug. 29, officials announced.

An evacuation center was set up at Murrieta Valley High School, 42200 Nighthawk Way in Murrieta, for those affected. Small animals were taken to Animal Friends of the Valleys at 33751 Mission Trail in Wildomar. The San Jacinto Animal Campus at 581 S Grand Avenue in San Jacinto, was opened for large animal evacuations, but most took their animals to friends, families or other locations , such as Galway Downs.

As of press time, all evacuation orders were reduced to evacuation warnings, allowing residents to return to the area, Cal Fire said.

The fire spanned both Riverside and San Diego counties. On the Riverside County side, it was burning in the southwestern end of La Cresta, an unincorporated community at the foot of the Santa Ana mountains.

On Sunday, the South Coast Air Quality Management District issued a smoke advisory for western Riverside County and the Coachella Valley through Monday afternoon. The smoke could be seen from Orange and San Diego counties.

"If you smell smoke or see ash due to a wildfire, limit your exposure by remaining indoors with windows and doors closed or seeking alternate shelter, and avoiding vigorous physical activity," SCAQMD officials said.

Monday afternoon, the U.S. Forest Service announced the closure of all 20 million acres of California's national forests to the public due to the wildfire risk. The closure took effect Tuesday, Aug. 31, and will last at least until Sept. 17, officials said.

Firefighters were battling the flames from the ground and air, including the use of four air tankers. Crews from the U.S. Forest Service, Murrieta, Hemet and Corona were assisting the 150 firefighters from Riverside and San Diego counties.

As of press time, firefighters had made significant headway on the blaze, which was originally burning in medium to heavy fuels at a moderate rate, announcing containment to be at 50% Tuesday morning.

Kim Harris can be reached by email at [email protected]