UPDATE: Marines from Camp Pendleton among those confirmed killed In Kabul bombing 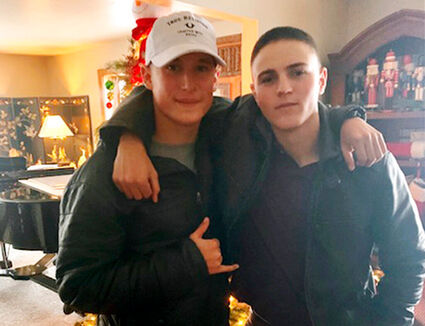 This Dec. 2019, photo provided by Regi Stone shows Eli Stone, left, and Rylee McCollum, at Christmas in Stone's house in Jackson, Wyo. Rylee McCollum, of Bondurant, Wyo., was one of the U.S. Marines killed in the suicide bombing at the Kabul airport, in Afghanistan, according to his sister, Roice McCollum.

SAN DIEGO - Nine Marines and one sailor based at Camp Pendleton were among the 13 U.S. service members killed in a suicide bombing at Hamid

evacuations on Aug. 26 in Afghanistan.

A young husband with a child on the way. Another man who always wanted to be in the military. A man who planned to become a sheriff's deputy when his deployment ended. Heartwrenching details began emerging Friday about some of the 13 U.S. troops killed in a horrific suicide bombing at Afghanistan's Kabul airport, which also claimed the lives of more than 160 Afghans.

Eleven Marines, one Navy sailor and one Army soldier were among the dead, while 18 other U.S. service members were wounded in Thursday's bombing, which was blamed on Afghanistan's offshoot of the Islamic State group. The U.S. said it was the most lethal day for American forces in Afghanistan since 2011. The White House said President Joe Biden will look for opportunities to honor the servicemembers who lost their lives, many of whom were men in their early 20s.

Here are the stories of some of the victims and the people who are mourning them:

Rylee McCollum, a Marine and native of Bondurant, Wyoming, was married and his wife is expecting a baby in three weeks, his sister, Cheyenne McCollum, said.

"He was so excited to be a dad, and he was going to be a great dad," McCollum said. She said her brother "was a Marine before he knew he was allowed to be a Marine ... He'd carry around his toy rifle and wear his sister's pink princess snow boots and he'd either be hunting or he was a Marine. Sometimes it would be with nothing on underneath, just a T-shirt."

McCollum said her brother wanted to be a history teacher and a wrestling coach once he completed his service. Another sister, Roice McCollum, told the Casper Star Tribune that her brother was on his first deployment when the evacuation in Afghanistan began.

Regi Stone, the father of one of Rylee McCollum's friends, described McCollum as "a good kid," who was resilient, smart and courageous. Stone shared a note that his wife, Kim, sent to their son Eli Stone, who is also in the military and deployed elsewhere. In the note, Kim wrote that she remembered telling the friends to run the other way if they had to go in first and that both of them said, "If we die doing this, we die doing what we love."

Lance Corporal Kareem Mae'Lee Grant Nikoui, of Norco, California, sent videos to his family hours before he died, showing himself interacting with children in Afghanistan. In one of the clips, he asked a young boy to say hello.

Close family friend Paul Arreola said the videos show "the heart of this young man, the love he has."

"The family is just heartbroken," he said. Arreola described Nikoui as an "amazing young man" full of promise who always wanted to be a Marine and set out to achieve his goal. He is survived by his parents and three siblings.

"He loved this country and everything we stand for. It's just so hard to know that we've lost him," he said, crying.

Nikoui was also in the JROTC, and the Norco High School Air Force JROTC posted on Facebook that he was "one of our best Air Force JROTC cadets" and that "Kareem was set on being a Marine & always wanted to serve his country."

The city of Norco said Friday in a post on social media that Nikoui's name will be enshrined on a memorial wall in the city.

Marine Lance Corporal Jared Schmitz grew up in the St. Louis area and was among a group of Marines sent back to Afghanistan to assist with evacuation efforts, his father, Mark Schmitz, told KMOX Radio.

Mark Schmitz said his son always wanted to be a Marine. He said he learned of his son's death when the Marines came to his home in Wentzville, Missouri, at 2:40 a.m. Friday.

"This was something he always wanted to do, and I never seen a young man train as hard as he did to be the best soldier he could be," Schmitz said of his son. "His life meant so much more. I'm so incredibly devastated that I won't be able to see the man that he was very quickly growing into becoming."

Staff Sgt. Taylor Hoover, of Utah, had been in the Marines for 11 years and was remembered as a hero who died serving others, his father Darin Hoover said.

"He is a hero. He gave his life protecting those that can't protect themselves, doing what he loved serving his country," said Darin Hoover, who lives in a Salt Lake City suburb.

He said he heard from Marines throughout the day Friday who said they are grateful they had his son as their sergeant.

"They look back on him and say that they've learned so much from him," Darin Hoover said. "One heck of a leader."

His father said his son was also a best friend to his two sisters and loved all his extended family. He had a girlfriend in California and was the kind of guy who "lit up a room" when he came in, his father said.

Nate Thompson of Murray, Utah, first met Hoover when they were 10 years old in Little League football. They stayed friends through high school, where Hoover played lineman. He was undersized for the position, but his heart and hard work more than made up for what he lacked in statute, Thompson said. As a friend, he was selfless and kind.

"If we had trouble with grades, trouble with family or trouble on the field, we always called Taylor. He's always level-headed, even if he's struggling himself," he said.

Corporal Daegan William-Tyeler Page served in the 2nd Battalion, 1st Marine Regiment based at Camp Pendleton, California, and planned to go to trade school and possibly become a lineman after his enlistment ended, his family said in a statement.

Page was raised in Red Oak, Iowa, and in the Omaha metro area and joined the Marines after graduating from Millard South High School. He is mourned by his girlfriend, parents, stepmom and stepdad, four siblings and grandparents, the family said in a statement released by a family friend. The statement said the family did not wish to speak to the media at this time.

"Daegan will always be remembered for his tough outer shell and giant heart," the statement said. "Our hearts are broken, but we are thankful for the friends and family who are surrounding us during this time. Our thoughts and prayers are also with the other Marine and Navy families whose loved ones died alongside Daegan."

Army Staff Sgt. Ryan Knauss was remembered as a motivated man who loved his country and was looking forward to coming back to the U.S. and eventually moving to Washington, D.C., family members told WATE-TV in Knoxville, Tennessee.

Knauss' grandfather, Wayne Knauss, told the television station that the family received word of Knauss's death on Friday, and funeral services were being planned. Knauss said his grandson attended Gibbs High School and grew up in a Christian home.

"A motivated young man who loved his country," Wayne Knauss said. "He was a believer, so we will see him again in God's heaven."

Stepmother Linnae Knauss said Ryan planned to move to Washington after he returned to the U.S.

"He was a super-smart hilarious young man," she said.

Hunter Lopez, whose parents work at the Riverside County Sheriff's Department in Southern California, was a sheriff's Explorer for three years before joining the Marine Corps in September 2017, Sheriff Chad Bianco said.

Bianco said Lopez planned to follow in his parents' footsteps and become a Riverside County Sheriff's Deputy after his deployment.

Lance Corporal David Lee Espinoza, a Marine from Laredo, Texas, joined the military after high school, and was being remembered as a hero by his mother.

"He was just brave enough to go do what he wanted and to help out people. That's who he was, he was just perfect," his mother, Elizabeth Holguin. told the Laredo Morning Times.

In a statement, Cuellar said Espinoza "embodied the values of America: grit, dedication, service, and valor. When he joined the military after high school, he did so with the intention of protecting our nation and demonstrating his selfless acts of service."

The other three American military personnel who died in the bombing were Staff Sgt. Ryan C. Knauss from Ft. Bragg, Sgt. Johanny Rosariopichardo

``These fallen heroes answered the call to go into harm's way to do the honorable work of helping others,'' said Gen. David H. Berger, commandant

of the U.S. Marine Corp. ``We are proud of their service and deeply saddened by their loss.''

Meanwhile, two more San Diego-area families that were trapped in the Kabul region of Afghanistan were evacuated from the country, a congressman said Friday.

``Amidst the heartbreak of yesterday and the chaos that has gripped Afghanistan for weeks, we continue to make extraordinary progress in bringing

our people home,'' Rep. Darrell Issa, R-Bonsall, said in a statement. ``It is an honor to help rescue and reunite families and loved ones, but we still have

are among of six El Cajon-area families who have been extracted from Afghanistan. The first four evacuated included seven adults and 16 children.

``We believe that most of the 20 total children are enrolled in school within the Cajon Valley Union School District, although exact numbers are

not known at this time,'' according to a statement from Issa Representative Jon Wilcox.

Issa said, ``This has been an around-the-clock operation, and individuals inside of government and outside of it deserve our deepest thanks.

But more members of our community still need our help. The mission is to bring our people home, and we will continue to do it.''

after visiting extended family in the country this summer.

The 20 students and 14 parents -- who make up five families -- requested assistance from the U.S. government to fly home. According to David

``San Diego County is home to the most refugees in California, and I represent the large Middle Eastern community in the eastern part of the

county,'' he wrote. ``I have heard from my constituents their anguish over family members and loved ones currently trapped in Afghanistan.

``My constituents are rightfully concerned for the safety of these individuals and that they could be subjected to severe mistreatment, and

The Taliban, which ruled Afghanistan from 1996 until the U.S. invasion toppled the regime in 2001, continue to consolidate their hold over the

country. The Taliban has worked with Al-Qaeda -- planners of the Sept. 11 attacks -- in the past, but has clashed with the Islamic State militants and

terrorists known better as ISIS, who differ on the level of Islamic Fundamentalist law and how it should be enforced -- and how those who break

that law should be punished. 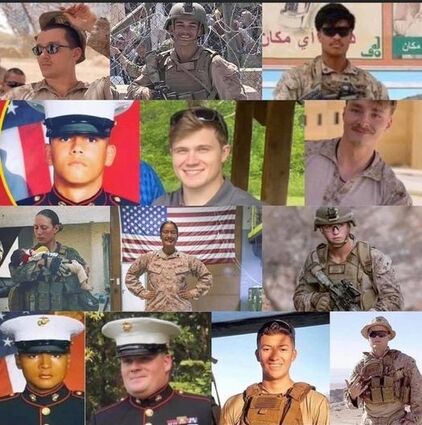 Composite of those who lost their lives in the Kabul, Afghanistan bombing.

groups as the U.S. continues its withdrawal from the country.

Thursday's bombing. The families could not reach the airport even though they had plane tickets, Cajon Valley School Board President Tamara Otero told the Los Angeles Times.

One additional family was able to secure passage out of the country earlier this week. Four students and two parents, along with one infant,

returned home after stopping in another country, Miyashiro said.