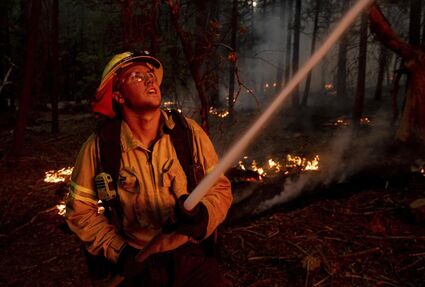 PLACERVILLE, Calif. (AP) – A wildfire burning for a week in Northern California continued to grow out of control, one of about a dozen big blazes in the drought-stricken state that have destroyed hundreds of homes and forced thousands of people to evacuate.

There was zero containment Aug. 22 of the Caldor Fire, which had charred nearly 154 square miles (399 square kilometers) of trees and brush in the northern Sierra Nevada after breaking out Aug. 14. The cause was under investigation.

Firefighters hoped to take advantage of calmer weather and cooler temperatures a day after gusts pushed...