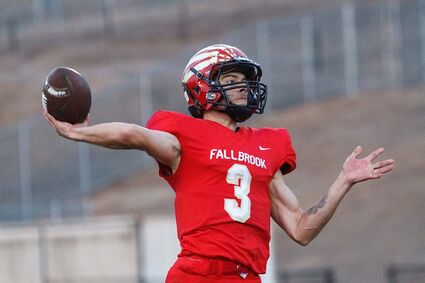 The Aug. 20 football game at Fallbrook High School began the season both for Fallbrook and for University City High School, which won the contest.

University City prevailed by a 48-7 margin. The Centurions had a 12-7 lead at the end of the first quarter and held the Warriors scoreless for the final three periods.

"There was a lot too little," said Fallbrook High Head Coach Troy Everhart. "It was a fundamentally poorly executed game on our part. Aside from Samuel Cooper, I thought we had better players." 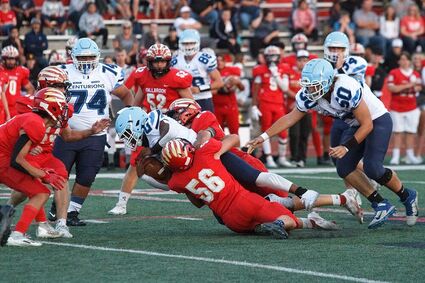 Cooper is University City's quarterback. He passed for four touchdowns and rushed for two more. His six rushing attempts gained a cumulative 100 yards.

One of the Centurions' touchdowns was followed by a kickoff. Fallbrook junior Kaleb Collings returned the kickoff 35 yards to the University City 44. The Warriors needed four additional plays to score the touchdown, including runs of 20 and 23 yards by junior Marcus Washington. A one-yard rushing touchdown by sophomore Chris Bausch put Fallbrook on the scoreboard, and senior Josh McBroom kicked the extra point.

On four other occasions, Fallbrook advanced past midfield but either committed an actual turnover or turned the ball over on downs. "We've got to get better. We didn't execute past the 50," Everhart said.