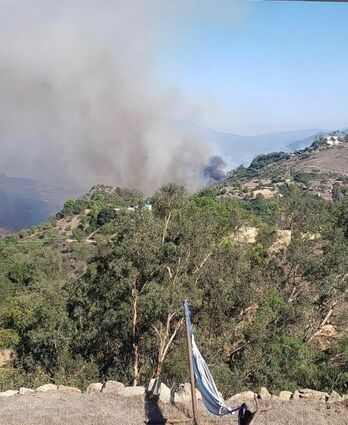 The Aruba Fire 90% contained and remains at 54 acres. Firefighters still have some work to do, finishing up the control line, removing hose, and cleaning up, according to NCFPD Twitter page.

Containment on the Aruba Fire in Rainbow is 60% as of Monday evening, according to Capt. Frank LoCoco of Cal Fire San Diego and the unified fire command. ``We'll be out there working today and possibly tomorrow, but it's looking good,'' LoCoco said.

With 30% containment, all Rainbow evacuations have lifted

All evacuations in Rainbow for the Aruba Fire have been lifted. The fire acreage was adjusted to 54 acres from 100, according to NCFPD PIO John Choi. There have been no injuries reported and no structures lost.

Choi said, “It’s absolutely our priority to repopulate and get people back into their homes, but we can’t do it until we can do it safely. We appreciate the community's patience.” He explained that there’s a lot of work that is done before repopulating an area. Utility and power poles and lines have to be assessed to make sure they aren’t compromised, but they were able to reopen the area this morning.

Cal Fire investigators were out yesterday but no cause for the fire has been announced.

As for the fire acreage that was adjusted down to 54 acres from the 100 acres reported yesterday, Choi said, “It’s a lot of guesstimation at first, but then we have flights with GIS that can actually map and plot the math and find out the actual acreage. They can do more sophisticated mapping from the air.

Crews will continue to be on scene today to address hotspots.

According to Cal Fire Captain and PIO Frank Thomas Lococo, firefighters will be on the scene several days building containment in the rugged terrain but firefighters have stopped the forward progress of the Aruba Fire that had started at about 4:15 on Sunday, Sept. 5.

According to Cal Fire/San Diego County Fire, the Aruba fire, which scorched an estimated 100 acres, the fire started with a moderate rate of speed and was 15% contained as of 9:30 pm.

Mandatory evacuation orders were issued today for some residents southeast of Rainbow because of the fire near Rainbow Crest Road and Mordigan Lane. San Diego County Sheriff's deputies were reported to be helping residents with the evacuation to the temporary evacuation center set up at Vallecitos Elementary School, located at 5211 Fifth St., in Rainbow. The Mandatory Evacuation Orders were put into effect as North County Fire reported there were immediate structures in danger.

As of 5:30 pm, the Aruba Fire was estimated to be 100 acres, although there was discussion heard over the airwaves whether the real figure was 100 acres or closer to 57 acres.

The Aruba Fire was a vegetation fire started in the Rainbow/Pala area, off state Route 76 near Pala Temecula Road, according to Southern California Air Operations.

According to NCFPD, the fire started in Rainbow in the 37000 block of Jeremy Way and was burning in the area of Rainbow Crest Road and Mordigan Lane. 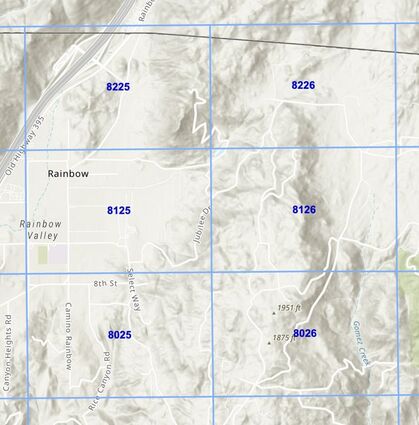 NCFPD John Choi PIO reported from the frontlines around 5:30 pm, "Fire agencies are holding the line with crews and aircraft and are hoping there will be no change in the wind."

People who had animals to evacuate were able to take them to Galway Downs, which was willing to take large animals like horses. It was reported that Galway Downs accepted 18 horses last week during the Chapparal Fire. Animals can also be evacuated to CRC Ranch at 34520 DePortola Rd or Milky Way Farms 34174 De Portola Rd in Temecula, according to Debbie Gibney with the Volunteer Evacuation Team.