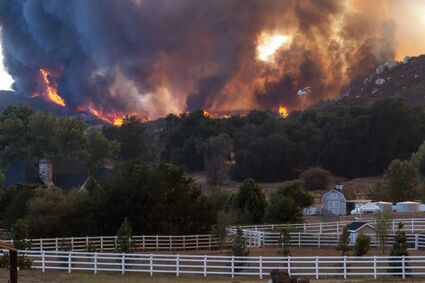 This photo was taken when the Chaparral fire was at its most dangerous. It is now expected to be fully contained by Wednesday 9/8/21.

RIVERSIDE - The 1,427-acre Chaparral Fire, which has been burning for over a week and briefly prompted evacuations early on, was 95% contained today, with full containment expected by Wednesday, officials said.

The fire erupted Aug. 28 in the Cold Springs area at the edge of the Cleveland National Forest in southwest Riverside County.

Two structures were burned the first day of the fire and a firefighter suffered minor injuries, according to the Riverside County Fire Department. The fire eventually grew to span both Riverside and San Diego counties.

Mandatory evacuations were ordered for parts of La Cresta, an unincorporated community at the foot of the Santa Ana mountains, but residents

have since been allowed to return.

Officials reminded the public that firefighters were still in the area conducting mop-up operations, and urged people to drive carefully on the area's narrow roads. They also said non-residents should stay away from the area until the Cleveland National Forest closure orders are removed on Sept.

At the height of the blaze, four air tankers and multiple water-dropping helicopters were making runs on the flames. Along with U.S. Forest Service crews, personnel from the county, Cal Fire-San Diego, Murrieta Fire & Rescue, the Hemet and Corona fire departments were assigned to containment

About 350 firefighting personnel were still on site as of Sunday.