Pala takes on the vine 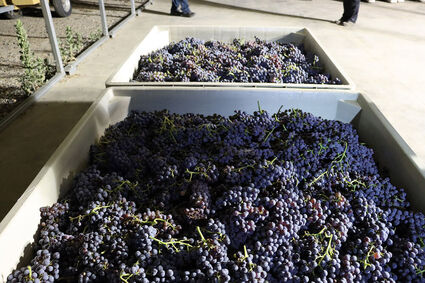 Gondolas of freshly picked grenache grapes, at the vineyard of the Pala Band of Mission Indians, wait to be transported to the Camins 2 Dreams winery in Lompoc.

Over the past decade, a small number of Native American reservations throughout the United States and Canada began planting vineyards and becoming wine producers, melding a spiritual and traditional love of the land with the ancient art of winemaking.

Although their winemaking operations are presently considered minuscule relative to the mega-industry of commercial wine production, tribes in British Columbia, Oklahoma, Arizona, New Mexico, Utah and Northern and Central California have already established their own successful and critically acclaimed brands.

And now there is a Southern California newcomer to the tribal vine movement.

With last year's grape harvest, the Pala Band of Mission Indians entered the emerging market of wine produced by Native Americans, and in August of this year they just harvested their second crop.

According to Christopher Nejo, legal analyst and researcher for the Pala Band of Mission Indians, the tribe is the first of its kind in this area to get into the wine-making business.

"Although I can't say for certain that the Pala Indians are the first Native American tribe in all of Southern California to become involved with their own wine production, I do believe that we are the first to do so in San Diego and Riverside counties," Nejo said.

Although it is commonly understood in the wine industry that there is generally a seven-year "vine-to-wine" period between newly-planted vines to adult vines, the Pala operation was able to achieve the 2020 harvest earlier than expected.

"We first planted the vineyards in 2017, but because the soil has such rich nutrition and the climate for grape-growing is so suitable here, we were able to harvest eight and a half tons of grapes last year," Nejo said, adding that next year's crop output in 2022 is anticipated to double the 2020 harvest.

Once the harvesting was done at night, the grapes were immediately transported to the Camins 2 Dreams winery in Lompoc, California for wine-making and bottling. The small winery is renowned throughout the industry because it is overseen by Central California's Chumash tribe's own Tara Gomez who has the distinction of being the first, if not the only, certified female Native American winemaker in the United States.

Pala's vineyards are currently grown on five acres which the tribe acquired a number of years ago from the onetime Ashley property holdings. The land was the site of mineral mining of tourmalines, morganite and kunzite by George A. Ashley, one of San Diego County's pioneer miners and gemstone cutters. According to Nejo, the tribe has plans to expand the vineyard by an additional five acres.

One factor that influenced the tribe's decision to grow wine grapes included the nature of the soil itself which contains decomposed granite, creating favorable conditions for the grape vine's deep roots to flourish.

And because the vines pull their nutrients and water sources from below the surface, the United States Supreme Court ruling in 2017 confirming that tribal primary water rights in the United States included groundwater as well as surface benefited the Pala decision to begin wine production.

Bottled under its own label, "Palangax," the Pala Band of Mission Indians' viognier wine is presently offered at the reservation's Pala Casino Spa and Resort as well as sold at the Pala Mini Mart at 11154 Hwy. 76 in Pala. Other wines from the first harvest will be available this fall, Nejo said.

Following a trend among Native American winemakers who find label-naming inspiration from their own tribal languages, the Palangax label is derived from a translation of the Pala tribe's Cupeño/Luiseño language's words for "at Pala." 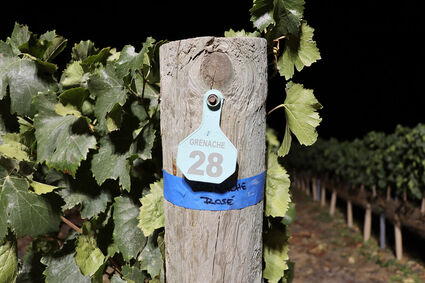 Row 28 of grenache grapes is part of the harvest of this year's crop of Pala's red wine grapes.

Before the Indian Gaming Regulatory Act of 1988 which regulated gaming activities on the tribal reservations in San Diego County, the Pala reservation was mostly limited to residential and minor agricultural activities. Today revenues from the reservation's hugely successful and popular Pala Casino Spa and Resort, which first opened its doors in 2001, have been used to assist the tribe's continued diversification of its agricultural businesses including the newest foray into grape growing and wine production.

"It's a natural progression for us," Nejo said, "because Pala had already been growing and operating hundreds of acres of citrus and avocado groves for many years."

But the move to wine production is more than just parlaying a winning hand into agricultural success for the Pala Band of Mission Indians. It's also about a deep and spiritual connection of the Native Americans to the land and all that grows upon it.

"We have had the elders of the tribe come out and bless the vineyard each year," said Nejo. "That's a sacred ritual for us, and one that will always be part of our grape-growing seasons."