Larry Elder, a front-runner candidate for governor, stopped in Temecula on Friday, 9/10 to tour some businesses and talk with residents.

Elder, a conservative radio talk-show host appears to be a front-runner among more than 46 candidates who are on the ballot in the event voters vote "yes" on recalling Governor Newsom. There have also been 6 or 7 people who were approved as "write-in" candidates on Sept. 3, 2021.

Larry Elder has raised over $11 million. 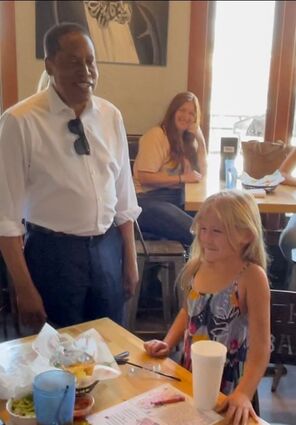 California candidate for governor Larry Elder stops to talk to Lily, age 6, from Fallbrook, who wasn't sure what all the excitement was about.

Newsom has raised $32 million to fight the recall. State law allows the target of a recall to accept unlimited sums of money - and his campaign committee has already received several donations of $1 million or more, according to CalMatters. Challengers can only accept as much as $32,400 from each single donor.

The election is this Tuesday, September 14.