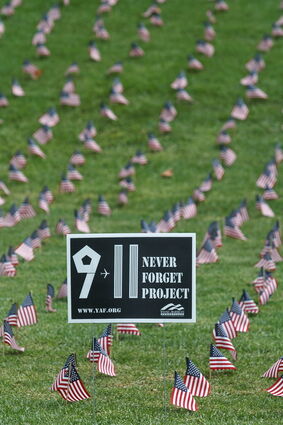 SAN DIEGO - On the 20th anniversary of the 9/11 terrorist attacks, memorials, parades and other events commemorating those who lost their lives were being held today across San Diego County.

lifeguards, and local military personnel in attendance. Local first responders marked the attacks with an invocation, a moment of silence, and a symbolic

ringing of the station's bell.

Another event in Coronado was hosted by Rotary District 5340 at 8 a.m. at Hotel del Coronado. More than 100 first responders were recognized

during a commemoration, with representation from police, fire, EMT, health care, and military.

The mayor of National City, Alejandro Sotelo-Sous, spoke to KUSI News about the meaning of Saturday's services.

``It's making sure that our youth and the past community understand that this is something that really shaped our country,'' the mayor said.

The 3rd annual 9/11 Never Forget Half-Marathon Run was held at 8:30 a.m. at the Oceanside Pier and was dedicated to ``our brothers and sisters that

``On this 20th anniversary of September 11, San Diego joins the nation in remembering those we lost, the first responders who rushed in to provide

aid, and the members of our military who deployed to defend our country,'' San Diego Mayor Todd Gloria tweeted Saturday.

County Board of Supervisors Chair Nathan Fletcher said, ``Today we honor the heroes and the many lives lost on September 11, 2001. May we never

forget the spirit of resilience of our community, our first responders, our troops.''

Sheriff Bill Gore, who came to San Diego County in 1997 to head the FBI office, learned that within 24 hours after the 9/11 attack two of the

hijackers had previously lived in San Diego, ``which really put San Diego in the heart of the investigation.''

``I still get emotional talking about meeting the San Diego (FBI) officers and how proud I am of the work they did,'' Gore said in a videotaped

statement. ``I think we'll continue to improve and prevent this from ever happening again.''

More 9/11 tribute events were scheduled for Saturday afternoon and evening. A memorial tribute was set for 2:30 p.m. on the flight deck of the USS

Midway Museum, which will include a reading of the names of first responders who lost their lives in the attacks, tolling of the bells with an

In Fallbrook, the North County Fire Protection District, the Fallbrook Chamber of Commerce, and the American Legion will hold a 9/11 memorial event

at 3 p.m. at Fire Station 1, which will include a guest speaker, bell ceremony, and color guard.

as well as those in our community that have gone above and beyond in the call of service.'' The event will include a special 9/11 tribute.

In Escondido, the Brothers of 6 groups will host a Patriot Day Remembrance Dinner at 5 p.m. at American Legion Post 149. All proceeds will go

At the Del Mar Surf Cup Sports Park, Mainly Mozart, in collaboration with the National Conflict Resolution Center, will host a 7:30 p.m. benefit

concert, which organizers say ``will raise funds and bring awareness to NCRC's mission to overcome hatred, intolerance and incivility while ensuring the

memories of the heroes and victims are not forgotten.''

The event will feature members of the Del Mar Fire Department and Rancho Santa Fe Fire Protection District, who will participate in a special