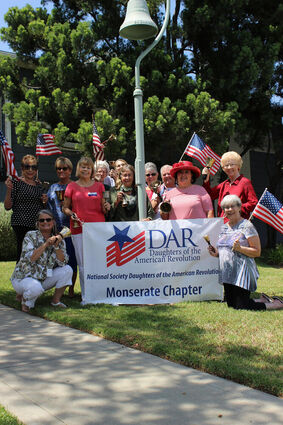 FALLBROOK – While Independence Day is a well-recognized national holiday, fewer people know about Constitution Week, an annual commemoration of the signing of the U.S. Constitution. This foundational document of national government is a living document that has stood the test of time for 234 years.

In communities across America, The National Society Daughters of the American Revolution advocates for the awareness, promotion and celebration of Constitution Week. The celebration’s goals are threefold: to encourage the study of the historical events that led to the signing of the Constitution in September 1787; to remind the public that the Constitution is the basis of America’s great heritage and the foundation for its way of life; and to emphasize U.S. citizens’ responsibility to protect, defend and preserve the U.S. Constitution.

The DAR, Monserate Chapter promotes awareness here in Fallbrook through its efforts to reach out to community leaders, government representatives, schools, churches, and individuals. Monserate members provide educational programs and resources to schools, erect public displays, and distribute flyers and postcards throughout the town.

In addition, the Monserate Chapter is encouraging the community to celebrate by participating in “Bells Across America,” a bell ringing ceremony on Constitution Day, Friday, Sept. 17. The ceremony will take place at the Fallbrook Woman’s Club, which proudly displays an original 1906 El Camino Real Guidepost Mission Bell used by Spanish missionaries to establish the Kings Highway.

Attendees are asked to meet outside the Fallbrook Woman’s Club at 238 W. Mission Road at 12:45 p.m. The bells will be rung at 1 p.m., signifying the time the Constitution was signed. Parents are encouraged to bring children, and attendees can bring their own bell. Local schools, churches and fire departments are asked to participate in the ceremony by ringing bells for five minutes exactly at 1 p.m.

“We invite everyone to join us in celebrating this powerful document that upholds and protects the freedoms central to our American way of life,” Lemoine said.

The Monserate Chapter is a Fallbrook area chapter with over 65 members living throughout the northern San Diego and Riverside counties. All members are lineal descendants of those who supported the cause of independence in the Revolutionary War. By fostering knowledge of, and appreciation for the Constitution, DAR helps to keep alive the memory of the men and women who secured our nation’s foundational liberties.

The next monthly meeting of the Monserate Chapter will be held Thursday, Oct. 21 at 10:30 a.m. and women interested in membership in the DAR are invited to attend. Contact the Regent at [email protected] for more information.

Submitted by the Daughters of the American Revolution Monserate Chapter.