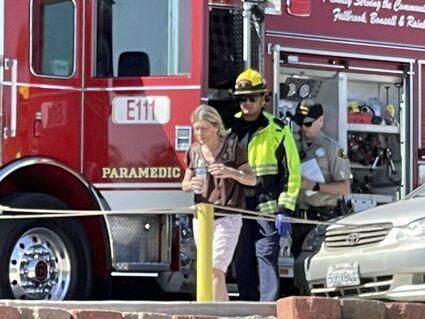 A female is assisted and being transported with minor injuries from an explosion and fire that happened at the Village Apartments at 1433 S. Mission Rd.

UPDATE: A resident reported that LtCol. J.P. Norman was driving back from church and saw the fire. He ran into the flames, helped the woman out of the house, and then put out the fire with a fire extinguisher before the North County Fire arrived.

According to Captain John Choi, Norman was not on scene when firefighters arrived. They were told about Norman who "apparently used an extinguisher and extinguished some fire but did not fully extinguish all the fire. Crews had to extinguish the fire and check for extensions or fire when they arrived."

Sept. 19 - A man was transported by Mercy Air 5 to the UCSD Burn Center in San Diego after an explosion in a Fallbrook apartment at 1433 S. Mission Rd, known as the Village Apartments. The call came in Sunday, September 19, at 1:32 pm as a working residential fire, according to NCFPD PIO John Choi.

The mother of the male transported to UCSD Burn Center said she was asleep in another room. She was also assessed and transported to UCSD with minor injuries. There was a dog in the apartment that was safely removed with no injuries, according to NCFPD PIO Choi.

It was reported on scene by the mother of the male who was injured and transported that he was cooking a marijuana product known as wax. This has not been verified by authorities. Wax is a type of butane hash oil (BHO). Butane gas is used as a solvent to extract the major cannabinoids and terpenes from buds and trimmings. Butane is highly flammable and unstable, and the possibility of butane explosions makes DIY extraction dangerous, according to Weedmaps.com.

According to PIO Choi, San Diego Bomb and Arson was also enroute as well. It was confirmed by SDSO Lt. Galve in that the Sheriff's Bomb and Arson team were called at 2:04 pm.

A hole was blown when an explosion happened at about 1:32 pm.

The fire was contained to one unit in the apartment building. Several agencies were involved, including Vista Fire, NCFPD, and San Diego County Sheriff's Department.