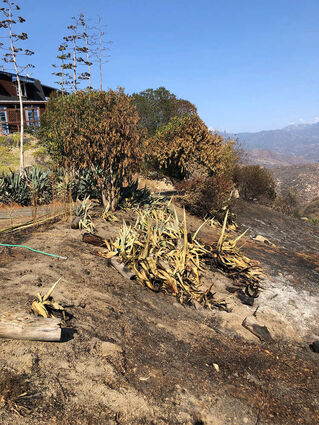 Although the fire burned close, no homes were damaged in the quickly-controlled blaze. Village News/North County Fire photos

Conditions are ripe to indicate a serious fire season is likely approaching. There has been a lot of publicity about these threats, and locals will never forget the devastation of the Gavilan Fire in February 2002 and the Rice Fire in October 2007.

Tinder is beckoning and Santa Ana winds are around the corner, but there was good news with the latest local fire.

The Aruba Fire on Sunday, Sept. 5, started in rough terrain east of I-15 and north of Hwy. 76 in Rainbow. Temperatures were in the mid-90s, there was moderate wind, and the fire was reported at 3:15 in the afternoon, right in the middle of the critical burn time, 2-5 p.m..

The fire was detected in Gomez Creek, reputed to be one of the most "fire prone" canyons in the county with more than plenty of dry fuel. Fires normally burn upward, and this fire was burning uphill towards Rainbow Crest Road.

In other words, this could be a serious fire. Instead, it burned only 54 acres.

"The unified effort with North County Fire Protection District was a fantastic county wide effort," said Capt. Frank Lococo of Cal Fire. "We were able to keep the fire small with no damage to homes and no injuries or lives lost."

The success wasn't by accident. The nearest fire station was in Rainbow, which was a volunteer station when it was first formed in 1967. It merged with the North County Fire Protection District in 1987 to add emergency medical technicians, but it wasn't until January this year that it shifted to being entirely run by full-time personnel from the NCFPD.

When the fire was reported, the officer on duty at the Rainbow station was Capt. Joey Bradshaw, a 17-year veteran of the NCFPD. He's been a captain for seven years and is also an acting battalion chief.

Bradshaw and his crew of three on Engine 113 was the first to reach the fire, taking only 5-7 minutes.

"I had been in the area recently on a broken water pipe, so I knew the road and had an idea about where the fire was headed, towards Rainbow Crest Road." Bradshaw said. "It's pretty primitive, but we made it to the home that was most threatened and was able to get the engine up the driveway.

"From there we had a great view of the fire from the back of the house and were able to direct other responding engines. We could see it was a fairly large fire."

Bradshaw had to decide whether to attack the fire or be defensive. With the fire close to homes and not everyone evacuated, he decided to be defensive – and they were able to keep the fire in check.

"As aircraft support arrived, I was able to issue a 'no divert' order because homes and people were threatened," he said. "That meant the air support wouldn't be re-assigned."

Bradshaw said 4-5 engines arrived quickly to the area and he was able to have them spread out for the best spots to attack the fire.

"The first thing to determine is whether we can attack the fire or defend. Being first on the scene in a 3-person Type One engine, it was clear the job was to direct others coming in rather than being aggressive."

It's something a volunteer fireman likely couldn't handle, noted Battalion Chief Rob DeCamp, who arrived about 15 minutes after the captain got the ball rolling.

"Capt. Bradshaw gave a great report on the conditions and made early contact with supporting units," DeCamp said. "He coordinated evacuation orders early with collaboration with the Sheriff and Cal Fire."

"It's in these times that it's important to maintain your composure, and Capt. Bradshaw certainly handled it well," DeCamp added. "You feel the pressure with lots of smoke and homes being threatened. You feel the weight of the world on your shoulders!"

That weight is lightened knowing you have support.

"We had incredible air support with the fire sitting almost midway between the Cal Fire bases in Hemet and Ramona," DeCamp said.

The vegetation fires in rural areas are the responsibility of Cal Fire but the North County Fire Protection District is responsible for people and structures. In fact, all the nearby departments have the same protocol. They help one another. In this case, units came from Vista, Oceanside, Pala, Rincon, and the Riverside area.

"We have great coordination and collaboration with Cal Fire," said DeCamp, who shared Incident Command duties with two battalion chiefs from the state agency when they arrived minutes after he had relieved Bradshaw.

Bradshaw was assigned to lead one of the three divisions that worked the fire from different angles. The other division leaders were Carlsbad Fire and NCFPD captains Nick Ordille and Richard Berry.

DeCamp said the actions of the divisions were responsible for saving homes in the area.

Bradshaw said he recently returned from the huge Dixie Fire Northern California and that he had worked on other major fires, but the Aruba Fire was the first time he had a larger, responsible role.

It points to the department's focus on training, not only with other stations in the district, and Cal Fire, but also other nearby communities. They prepare for the worst and hope for the best.

The Aruba fire was officially in Cal Fire's jurisdiction because it was a vegetation fire, but with homes threatened it became a unified effort. With the size of the fire and homes threatened, the fire was handled on the fire chief level, meaning two battalion chiefs for Cal Fire and DeCamp.

Coupled with cameras on the ground, once an air reconnaissance plane took photos it allowed the distant command center to become involved in the assessment and battle plan. 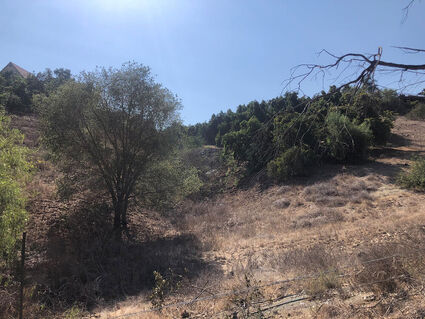 The Aruba fire began during critical burn time on a hot day, perfect conditions for an out of control fire. Firefighters from the station in Rainbow were able to begin plans to control the potentially devastating fire. Village News/North County Fire photos

"There are a lot of quick decisions to be made – lots of moving parts – and is it stressful? Absolutely," said DeCamp, "but these are people with years of training and there is a sense of calm at the same time there's stress."

With winds potentially pushing the fire northwest towards Riverside County, the command moved towards using all its assets to achieve containment.

"It's a testament to how well the county works together," Lococo said.

Even with 25 engines sent to Northern California, Cal Fire has three dozen engines in service for the county.

"This showcases how we can work with more than a dozen different agencies who responded to the Aruba Fire," Lococo said. "It was a fantastic display of our forces. Our chief likes to say it's the 'attack with the village' approach."

Instead of how many homes burned or number evacuated, this a positive story about the quick action by the department at savings homes and endangered residents.

The fire was under control by dark, making it a successful day.