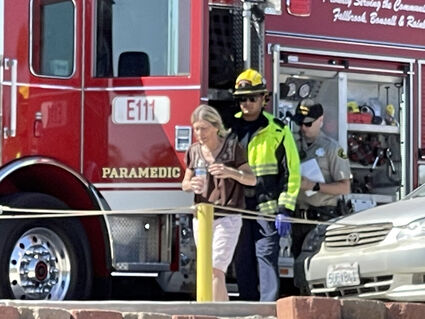 A female is assisted before being transported with minor injuries from an explosion and fire that occurred Sunday, Sept. 19, at the Village Apartments, 1433 S. Mission Road. Village News photo

A man was transported by Mercy Air 5 to the UCSD Burn Center in San Diego after an explosion in a Fallbrook apartment Sunday, Sept. 19.

The call to Village Apartments at 1433 S. Mission Road came in just after 1:30 p.m. as a working residential fire, according to North County Fire Protection District spokesman John Choi.

A dog in the apartment was safely removed with no injuries, Choi said. 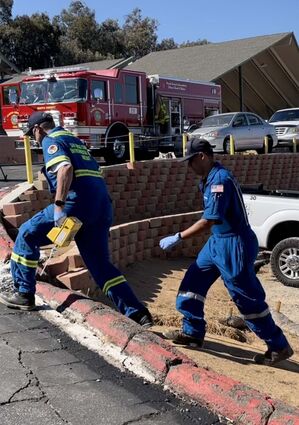 Hazmat workers arrive at the scene of an explosion at 1433 S. Mission Road in Fallbrook. Village News photo

According to Choi, the mother said her son was cooking a marijuana product known as wax, though authorities have yet to verify the claim.

Wax is a type of butane hash oil where butane gas is used as a solvent to extract the major cannabinoids and terpenes from plant's buds and trimmings. Butane is highly flammable and unstable, and the possibility of butane explosions makes do it yourself extractions dangerous, according to Weedmaps.com.

The fire was contained to one unit in the apartment building, Choi said.