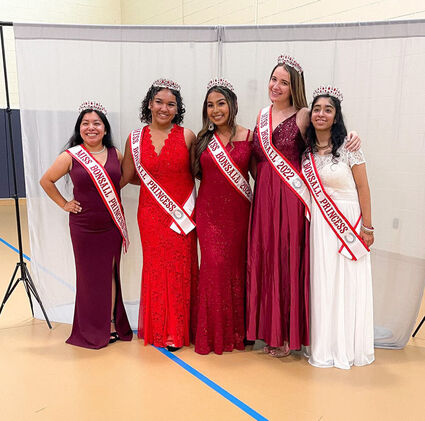 BONSALL – The 2022 Miss Bonsall Pageant Coronation was held Saturday, Sept. 11 for family, friends, and local first responders. The Miss Bonsall Pageant and Scholarship Fund is a local nonprofit 501c3 organization that promotes community service and mentorship. With two divisions, Miss Teen Bonsall and Miss Bonsall, the pageant is the featured fundraiser for a local charity partner. The annual charity of choice is the Fallbrook Animal Sanctuary.

The pageant held a "People's Choice " award contest to benefit the sanctuary, where donors cast $1 per vote for their favorite candidate. The organization also promoted the "Pageanting with Purpose" program, asking that all families, guests, and candidates bring a donation item for the animals. The response was overwhelming and the ladies collected over 200 pounds of donation items, and $525 in "vote" donations, that was presented to the Fallbrook Animal Sanctuary Sept. 18.

This year the candidates held a special 9/11 20th Anniversary Remembrance Ceremony during the coronation. Remy Arnold led the guests and candidates in a moment of silence and reflection; during that time each candidate came forward and rang a bell to honor those lost. The candidates also created a "Remembrance Tree" for all in attendance to add messages of thanks, which was filled by the end of the event, and presented to first responder attendees from Vista Fire Department E123.

Submitted by the Miss Bonsall Pageant.