North County Fire reminds everyone to drive carefully in the rain 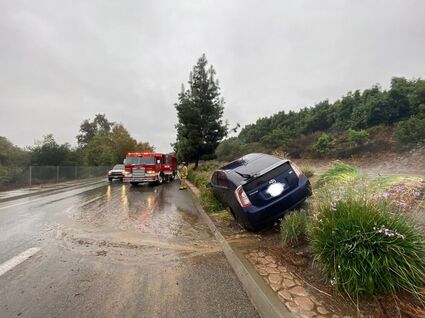 NCFPD PIO John Choi wants to remind everyone to slow down and drive carefully in the rain. "We've had several accidents this morning. In less than an hour we've had four traffic collisions. People need to be reminded to drive carefully," said Choi.

One vehicle went over the side and hit a metal power pole on SR 76 near Ramona. There were minor injures and that patient was transported to Temecula Valley Hospital.

On S. Mission Rd and Sterling Bridge at 7:35 am there was a solo vehicle that spun out. Lane one was closed until the tow truck could arrive. It damaged a large water pipe in the center divider.

Another traffic collision was reported on Northbound 15 south of 76 at 6:39 am. Two vehicles spun out and collided. One person had non life-threatening injuries and was transported to Palomar. Another accident was on southbound 15 north of Mission Rd. at 7:29 am. A single-vehicle collision into the center divider.

There are differing reports for rain totals, but it appears to be between .04 inches and .07 inches in Fallbrook, Bonsall and Rainbow.

Today will continue to be cloudy and light rain on and off.

Last night at about 11:56 pm there was a vehicle fire. fCFPD crews arrived on the scene to find a Fully engulfed vehicle at 1149 E. Alvarado. Crews were able to keep the fire from spreading to the home. The fire is under investigation and there are no injuries to report.

"This is really our first rain, so there is oil that comes up out of the asphalt from earlier traffic accidents. Also the low lying areas with dips in the street, those areas pool a lot of water and it's easy to hydroplane, so it's better to slow down when you hit those low-lying areas," said Choi.