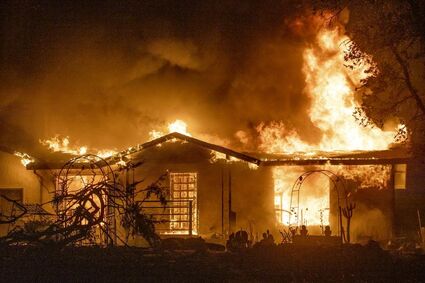 In this Sept. 27, 2020, file photo, a house burns on Platina Road at the Zogg Fire near Ono, California. Pacific Gas & Electric has been charged with manslaughter and other crimes, Friday, Sept. 24, 2021, in a Northern California wildfire last year that killed four people and destroyed hundreds of homes. (AP Photo/Ethan Swope, File)

It is the latest legal action against the nation's largest utility, which pleaded guilty last year to 84 counts of involuntary manslaughter in a 2018 blaze ignited by its long-neglected electrical grid that nearly destroyed the town of Paradise and became the deadliest U.S. wildfire in a century.