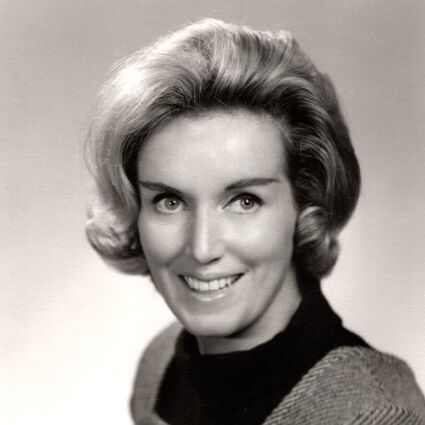 Joyce Carol Esbensen (née Anderson) passed peacefully on Friday, Sept. 24. She had been suffering from Parkinson's disease for several years. Joyce was born a die-hard Cub fan in Chicago, Illinois on March 9, 1932. She graduated from the University of Colorado, Boulder with a BA in Education in 1954, and earned her Master of Arts degree from the University of Redlands in 1964.

Joyce was fiercely proud of and devoted to her family, her profession, the students she taught during her more than 20 year career teaching English at FUHS, and her friends. She spent most of her tenure at FUHS as the English Dept. Chair. Outside the classroom she spent innumerable hours inspiring, guiding and mentoring students in her roles as the Girls' Swim Team coach, Academic Team coach, Decathlon Team coach and as the Faculty Advisor of the school's literary magazine, KOPA.

Joyce was fiercely dedicated to her community in Fallbrook; there was almost nowhere she went in town where she didn't come across a former student whose life she had impacted. Not only as a teacher, but also as a member of American Association of University Women, she was a steadfast advocate for women.

She was passionate about F. Scott Fitzgerald and The Great Gatsby, education, correct grammar, and her rose garden. Over her life, she traveled the world with family and friends, instilling her curiosity in her eight grandchildren by taking each of them on a special trip. She inspired, mentored, praised and was respected by those who knew her. She was lucky to live a long enough life to watch her beloved Cubbies finally win the World Series.

A Celebration of Life will be held Oct. 16, 1 p.m., at Temecula Creek Inn - The Meadows venue, outside, 44501 Rainbow Canyon Road, Temecula. RSVP to [email protected]