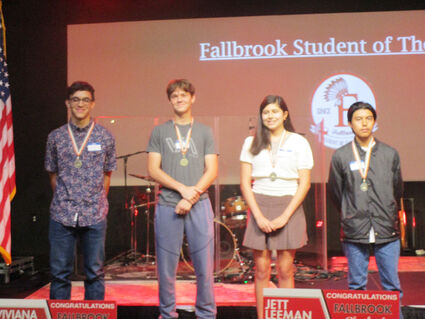 The first Students of the Month for the 2021-2022 school year in the Fallbrook Union High School District were honored at an in person breakfast at North Coast Church, Oct. 7; they are Viviana Lasley, Jett Leeman and Carl Maier from FUHS and Marcos Morales from Ivy High.

Emcee Greg Coppock welcomed the smaller than usual group at the event which he called "100% encouragement to young people who will shape the future." Out of about 2,000 students in the district, these four were selected as "the best of the best," said Spencer Osborn, North Coast youth leader who gave the invocation.

FUHSD Superintendent Ilsa Garza-Gonzalez said this school year is turning out to be harder than last year; her goal for the year is to remove two words from her vocabulary: pivot and challenge. She said she has a new challenge for everyone – "to be kind to someone who looks different, who was raised different, has different political views, different ideology or religious beliefs, talks differently." Each school year, her goal is to "touch one life" which makes her happy; "now it is one a day."

FUHS Principal Lauren Jones also spoke, the first time as principal rather than as a nominating teacher, so it is a new role and she was excited to be there. She also said, "Every student here is a name that has come across my desk."

Each student was given a Lamp of Knowledge medal by Marines of MAG-39 Marine Air Group as well as a bag containing certificates of recognition from local officials and gift certificates from local businesses.

Lasley was nominated by chemistry teacher Marin Pinnell who called her "a breath of fresh air." Pinnell said Lasley is taking Advanced Placement courses as well as International Baccalaureate courses, is part of the tutoring program, is leader of the environmental club and a part of the video program; she is on the school's morning news.

During distant learning, Lasley was the one student in Pinnell's class who always had her camera on. "She has an excellent GPA and is so friendly; I can't wait to see what she does in life," Pinnell said. Lasley said, "Thank you lovely ladies (the Student of the Month Committee); this is like the Oscars but for smart people!" She also thanked Pinnell whose class she took twice, and her parents "who paid for those expensive AP tests."

Lasley is applying to the UC system; her top three choices are UCLA, UCSD and UC Berkeley. She has not decided on a major yet.

Jones announced that Leeman has been awarded a Letter of Commendation as a National Merit Scholar for his PSAT scores. He takes AP courses the whole day, she said, "but doesn't look stressed; he goes with the flow."

Leeman was also nominated by Pinnell who compared him to a cappuccino, with a solid foundation of family (espresso coffee), and froth created by challenges he has faced. The hardest test was taking her AP Chemistry class as a sophomore. "The froth process doesn't always work, but Jett got through...the process wasn't always easy, he made a lot of noise.... but it was great to have Jett, watch him grow...the top (of the cappuccino) has a beautiful design on top; I can't wait to see what his is," Pinnell said.

Leeman called Pinnell one of the best teachers who instilled in him a love for STEM, so he will major in one of those areas (science, technology, engineering, math).

Jones read a note from Ashley Amato, the English teacher who nominated Maier who "stands out, thinks of more than himself; he impressed me two years in a row, online and in person; he is a Fallbrook Warrior actively participating in athletics, FFA and academics."

His mother said she had been worried that her son had not faced any adversity; "March 2020 changed all the rules." What she is most proud of is "he didn't just overcome the adversity of COVID, he excelled." Maier volunteered at the Fallbrook Food Pantry and is a leader on the football team too, mentoring two frosh football players.

Maier is applying to the UC system but his top college choices are Stanford, University of Chicago and Yale. He wants to major in law.

Morales was nominated by Ivy teacher Marty Camacho who said he asked Morales why he is at Ivy, "he replied that he didn't take school seriously but then realized there was light at the end of the tunnel because he could make up credits."

Morales was described as a leader who is self-motivated, engages with other students and is at the learning center both before and after school. He is dropped off at 6:30 a.m. and is still there one hour after school. Morales has already made up 10 credits this school year. Camacho called him "a breath of fresh air."

Morales said that he "used to be tormented by anxiety" and worried about failing; his family is struggling financially so, "I decided I wanted to start my own company designing clothing for the skating culture," so he can provide money for his family.

Morales concluded, "Life is like a puzzle, something you got to enjoy."

The next Student of the Month breakfast will be on Thursday, Nov. 4. For information on nominating a student or sponsoring the program, contact Lynn Grantham, 760-214-1755 or [email protected]