'The only thing that matters to me is that she shows up, period.' 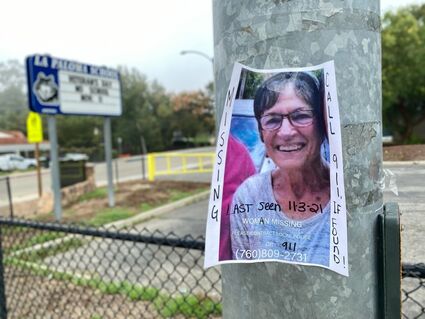 A sign alerting the public to Elena Roy's disappearance is posted to a pole near the Fallbrook Senior Center on Fallbrook Street.

Cataldo said the last time she disappeared about a year ago she did turn up before dusk.

"Part of the problem is that she gets bored in Fallbrook, she does have incremental dementia," he said, adding that she went missing between 1:30 and 1:45 p.m. Wednesday. "She can carry on a sparkling conversation with you, problem is she can't tell you where she lives or her phone number or even how to get back here."

He said the last time Roy disappeared the people who found her took her to the sheriff substation and that is what he thought would happen this time as well.

"That didn't happen this time. As we got fairly close to dusk, I went out and looked for her," he said, adding that Roy is an avid walker. He said he was unaware that Eric from Fallbrook Auto Works, who is Roy's regular mechanic spotted her Wednesday on the East side of Main Street until later in the day.

Due to her dementia, "she doesn't like to be apart from me or left alone," Cataldo said, adding that as like most dementia patients she gets mad about the slightest thing.

Cataldo said that it was a recurring problem but that she had promised that she wouldn't do it again.

Cataldo said that he called the police after searching for his wife just before dusk and that it took some time for deputies to respond then there was over an hour of questioning by police before he was finally able to notify the rest of the family.

He said first thing after he finished with the police Wednesday night, he called Roy's daughter Jessica to let her know her mother had been missing for about seven hours.

He said that he and Roy had grown closer over the pandemic.

Roy is white, 5 feet, 4 inches and weighs about 120 pounds. She has graying dark hair and wears glasses and was wearing a white, light blue and dark blue top with dark pants, a silver and turquoise bangle bracelet and blue leather-soled shoes with flowers on them (see photo) and a off-white beanie. She does have her purse with her, he said.

Tony Campbell contributed to this story.

A small group of people are still searching for for 83-year-old Elena Roy who was last seen on Wednesday, Nov. 3.

According to Lt. Arens with the San Diego County Sheriff Department's Media Relations Office the department has pulled back the Search and Rescue Teams from the search.

"I'm not sure the reason or if they are still looking," Arens said, adding that he wasn't "privy" to the investigation. "But yet Search and Rescue was out there for two days. I know they took today off. I don't know if they are regrouping to figure out where she might have went, where to have the volunteers search."

According to Private Investigator Tony Campbell said that Eric from Fallbrook Auto Works, who is Roy's regular mechanic, said he said he spotted her Wednesday on the East side of Main Street.

"Eric thought that was between 1 and 2 p.m. and she was headed north on Main Ave," Campbell said. "He was 100% sure it was her. He did not know if she was carrying a purse."

Campbell is currently reviewing security camera footage from businesses throughout Fallbrook trying to map a path that Roy may have taken.

One person suggested people throughout Fallbrook check in their sheds, backyards and any abandoned vehicles and buildings in their area for any signs of Roy.

As of this posting, the Fallbrook Sheriff's substation has not returned Village News' calls requesting information.

Hundreds of people have joined together in the search for 83-year-old Elena Roy who was last seen on Wednesday, Nov. 3, according to her son Jerry Swart. Swart is in town with the rest of his family aiding the Sheriff's Department in the search.

"We've had hundreds of people with the search. The outpouring has been amazing. We even had a church helping," Swart said. "Search and Rescue had about 60 people but they are done, it's been 48 hours. They had the helicopter out for two days along with drones and dogs."

Swart said that Search and Rescue will continue to follow all leads, even if the team is not actively searching.

"We're disabled, handicapped and beat up but it's my mom out there," Swart said of the effort by the family and volunteers.

He said his mom can walk pretty well for a woman her age, although she has a right hip that is bad.

The man Elena has been living with for years is the one who reported her missing, Swart said.

When asked why the man waited eight hours to report her missing, Swart reported that the mad said, "She has left three or four times before but she always comes back. I was just waiting for her to come back."

Swart said that his mom did leave one other time and she was found "in the bramble" in DeLuz.

"We still have volunteers searching east, west, north, and south," he said adding that he is hoping that someone in her neighborhood of McDonald Street and Woodcreek Drive will have video showing Roy.

He is also hoping businesses in town may have camera footage showing his mother and what direction she was heading.

Ross Curtis, an Allstate agent on Mission Road, reported to the Sheriff's department that he thought he saw Roy sitting on Beech Street next to the Citrus Plaza between 3 and 3:30 p.m. Thursday, Nov. 3. He said the Sheriff's department came out and also went inside the Citrus Plaza looking for her. "We have clients who get dementia and when you see a person that seems out of the ordinary, it catches your attention," Curtis said, adding that he thought he had seen her before. He has had clients with dementia who have shown up in his office five or six times a day so he's worked with the families to make sure they are aware.

Private Investigator Tony Campbell talked to Eric from Fallbrook Auto Works, who is Roy's regular mechanic. He said he spotted her Wednesday on the East side of Main Street.

"Eric thought that was between 1 and 2 pm and she was headed north on Main Ave," Campbell said. "He was 100% sure it was her. He did not know if she was carrying a purse."

Anyone with information was asked to call 911.

The Fallbrook Sheriff's substation has not returned our call for information.

Elena Roy was last seen Wednesday near Woodcreek Drive in Fallbrook, according to the San Diego County Sheriff's Department.

Elena Roy's husband, Chris Cataldo, shares a picture of Elena wearing the beanie that he believes she was wearing the day she disappeared on Nov. 3, 2021.