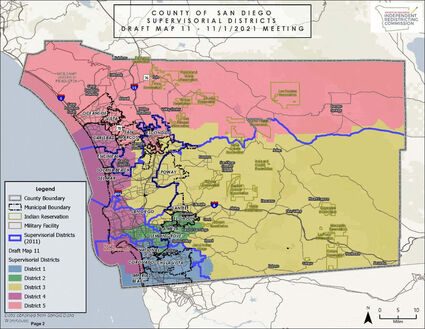 This draft map is one possible way the supervisorial districts could be realigned.

Following two public hearings this month, the County of San Diego Independent Redistricting Commission will have its final two hearings in December to determine its recommendation to the Board of Supervisors.

There are numerous variations of maps being considered with the Fallbrook area being an important piece in what has been described as a social and political jigsaw puzzle.

The independent commission has been tasked with recreating the five districts that govern the county. Their chore is to create districts that are even in population, based on...