Search continues for missing Fallbrook woman, family thanks community for its efforts 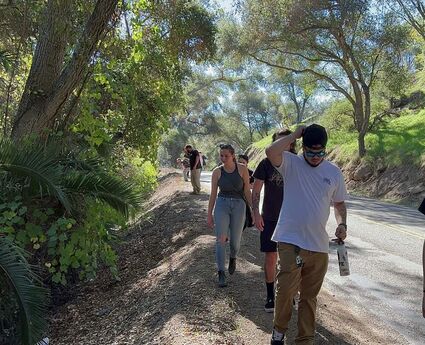 As of press time, Elena Roy, who turned 84 this week, is still missing after reportedly walking away from her home Wednesday, Nov. 3. Roy, who suffers from undiagnosed dementia, according to husband Chris Cataldo, is an avid walker.

The two, Cataldo said, had a minor disagreement before Roy walked away from the home that day.

"I thought I was just giving her some space. It wasn't unusual for her to go for a walk."

Roy's family, along with Cataldo and community volunteers, have searched for her daily since her disappearance and flyers have been placed around town in English and Spanish.

"I want to sincerely commend and thank the Fallbrook Community whose outpouring of concern, prayers.and active searching for Elena has been nothing less than astounding," Cataldo said. "I have met so many on the streets who may not have known her, but who appreciated her plight and have given so much of themselves to assist in so many ways.

"Close at hand was private investigator Tony Campbell and veteran search and rescue expert Rena Salomon, both of whom have been nearly superhuman in their efforts on her and our behalf. They have positively helped keep me going, but then so have so many of you in the streets, whom we previously may not have known, but who made themselves a sort of concerned second family – words fail for your really awesome effusion of caring and support during this heartbreaking ordeal."

This past weekend the search continued with nearly 100 community volunteers converging on an area surrounding Roy's home to search.

"There were around 100 volunteers and members of the Fallbrook community who came out to assist in searching a grid of 1.5 to 2 mile radius beginning at Elena Roy's home," said Salomon of the HEART Foundation, who has been assisting the family. "The volunteers went door to door requesting homeowners search their yards and assisted residences with each property search. Roadways, bushes, parks, tree lines, stores, abandoned vehicles, nearby ravines, large fields and waterways were checked by the volunteers and Elena was not found or any of her belongings."

Salomon said that the family was appreciative of the outpouring of support from the community.

"Both the family and I would like to thank everyone who came out today to help us search for Elena in the heat," she said during Sunday's search. "Usually those suffering with dementia are found within 1.5 miles from home, so we decided to take our search area to 2 miles but were not successful in locating her. We have a canyon that we were not able to clear and will be back out tomorrow with a small team to resume our search."

"Each team coordinator was assigned a quadrant grid with 10 (2) person teams assigned to them each," Salomon said.

Salomon said the goal Sunday was to recheck the areas close to Roy's home in Woodcreek where they have previously checked, in case Roy tried to make her way back home. She said,

"They [people with dementia] get turned around and confused when going through an episode and so we wanted to recheck the area," Salomon said.

The family and Salomon report they've gone out every day and even at night with flashlights. "We've checked roadways from Live Oak Park to Mission Road," Salomon said. "We checked all of downtown and anywhere she could have fallen into a ravine or culvert. We went up to where she was last found in DeLuz (referring to a previous time she was lost) and we checked the road going up both sides and walked Sandia Creek. We started in the downtown area and have gone down South Mission all the way to 76."

Roy was last seen Wednesday, Nov. 3 by her mechanic downtown near Main and Elder streets. It was reported that dogs had also picked up her scent but it ended when they got to Main and Elder Street as well.

It wasn't unusual to see her walking around town, but when it became dusk, her husband called the Sheriff's Department to report her missing. Afterward Search and Rescue spent 48 hours utilizing helicopters, dogs and volunteers to find Roy with no success.

Every day since her disappearance, her family, her husband, Salomon, and Private Investigator Tony Campbell have been searching, talking to businesses downtown, looking at videotapes of surveillance cameras from businesses around town and chasing down possible sightings from people who thought maybe they spotted her in the days after her disappearance.

"I would like to thank all the people of Fallbrook that have helped from the beginning," Elena's daughter Tami Young said. "All the volunteers, we can't thank them enough. We could not do this without the help of our many family/friends and neighbors who have worked behind the scenes as well as providing emotional support. Village Print and UPS Store for donating hundreds of flyers and Major Market donated food for our volunteers. Rena, who got us organized and has done so much. She got us out there and focused."

Tami's message for the community thier "properties, surveillance cameras and everything."

Family member Dorene Swart said, "I would like to thank Mary and Jeff from the Grocery Outlet for their generosity in donating groceries to our family during this incredibly stressful time while we have had family and friends from out of town helping to search." 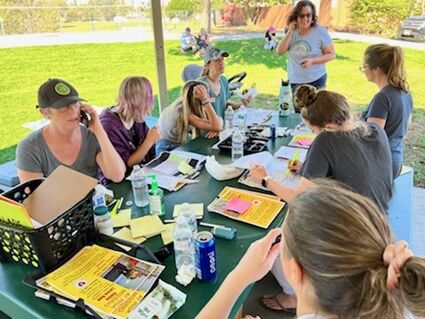 Roy, age 84, was wearing black pants and a white and blue short-sleeved shirt with blue and tan shoes on and an ivory beanie. If anyone sees a person fitting Roy's description they should immediately call 911.