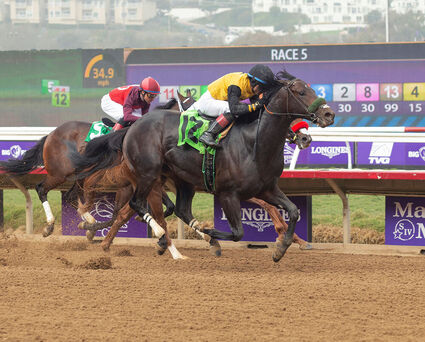 Four-year-old filly A G Indy won the Senator Ken Maddy Stakes for fillies and mares two years old and upward. Two-year-old San Luis Rey colts took first and second in the Golden State Juvenile Stakes for California-bred two-year-olds with Finneus winning the race and Slow Down Andy taking second. A G Indy is trained by Doug O'Neill and was ridden by Umberto Rispoli. Walther Solis trains Finneus, who had Joel Rosario for his jockey. O'Neill is also the trainer of Slow Down Andy, who was ridden by Mario Gutierrez.

The Senator Ken Maddy Stakes was a five-furlong turf race. A G Indy and Rispoli broke third among the nine entries. After 3/16 of a mile they were third, one and a half lengths behind leader Angelcents and a length in back of second-place Lagertha. A G Indy led fourth-place Time Limit by half a length.

The order of the first four horses was unchanged 3/8 of a mile into the race at which point A G Indy was half a length behind Lagertha, who was a full length in back of Angelcents. Time Limit was a length behind A G Indy.

Lagertha fell back to fourth by the beginning of the stretch. A G Indy was second, a length behind Angelcents and half a length in front of Time Limit.

A G Indy crossed the finish line 56.71 seconds after the start of the race. She was half a length ahead of Time Limit and one length in front of third-place Hear My Prayer.

The win was the fourth in 13 career starts for A G Indy, who was foaled in Kentucky on Jan. 29, 2017, and sired by Take Charge Indy out of Hong Kong Silver. Three of those wins have occurred during 2021. She finished seventh in her only previous stakes race, the November 2019 Jimmy Durante Stakes at Del Mar.

Finneus was foaled at Lovacres Ranch in Warner Springs on March 24, 2019. His sire is Stay Thirsty and his dam is My Fiona. He had five previous races, including a non-stakes win, prior to the Golden State Juvenile Stakes.

Slow Down Andy was foaled on March 9, 2019, in California. He was sired by 2016 Kentucky Derby winner Nyquist. His dam is Edwina E. He won his only previous start Oct. 9 at Santa Anita Park.

Twelve horses contested the Golden State Juvenile Stakes, which was seven furlongs on Del Mar's dirt course. Slow Down Andy and Gutierrez broke fifth while Finneus and Rosario broke ninth. After a quarter of a mile, Slow Down Andy was fourth, albeit only a length behind leader Billy's Bet and half a length in behind third-place Moose Mitchell. Finneus was ninth after two furlongs, trailing Billy's Bet by five and a quarter lengths and eighth-place Liberty Forever, a San Luis Rey colt trained by Peter Miller, by two lengths.

Fast Draw Munnings held the lead half a mile into the race; he led Billy's Bet by a head at that point. Slow Down Andy was third, half a length behind Billy's Bet. Finneus was in eighth place, three and a half lengths behind Fast Draw Munnings and a head in back of seventh-place Bandera Azteca.

Including starter bonuses, the total purse for the Golden State Juvenile Stakes was $178,000. First place was worth $99,750, which increased Finneus' career earnings to $246,366. 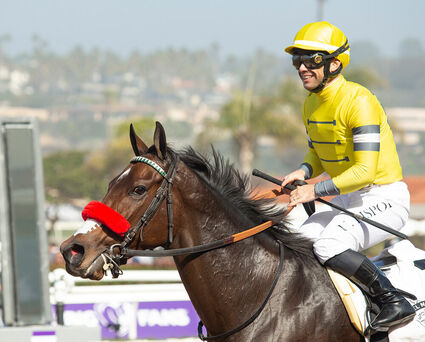