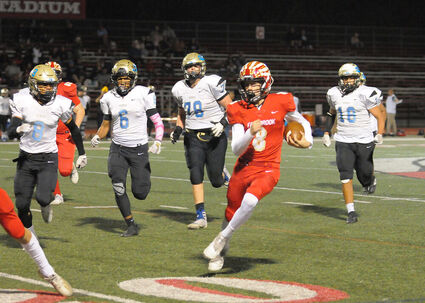 Freshman QB Evan Thomas stepped up big for the Warriors with a first down in Friday's CIF Playoff game, Nov. 12.

The 49-0 win was Fallbrook's first CIF playoff victory since 2015 and gives the Warriors a semifinal berth tomorrow night, Nov. 19, at Palo Verde High School in Blythe.

Fallbrook's first win of the season was at San Ysidro. That game also had 49 total points, although Fallbrook only scored 35 of those while the Cougars had 14. "When we played them in...