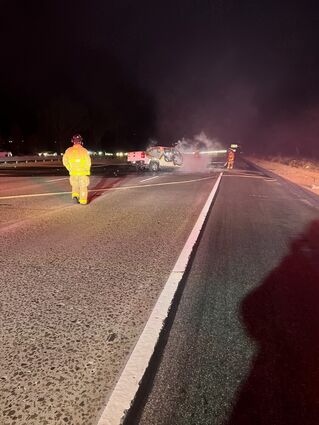 All lanes are blocked SB I-15 as fire crews put out a truck on fire. What is not clear in this picture is another car that was fully engulfed.

A two-vehicle accident closed all lanes north of the 76 on the southbound side, Friday, Nov. 26. One lane was opened a while later. NCFPD crews arrived on the scene to find a two-vehicle traffic accident with one vehicle fully engulfed, which caught the second vehicle on fire. One patient was transported to the hospital and crews were waiting for tow trucks to arrive on the scene so they could reopen the freeway at about 8 p.m.

In addition to the two-vehicle car accident and fire that had I-15 southbound freeway lanes closed, there were several other medical emergencies and accidents that kept NCFPD first responders busy this Thanksgiving. Despite these incidents, NCFPD PIO John Choi said they are thankful for community vigilance and that the fires were contained to vehicles.

There was a solo vehicle fire that occurred at about 6 p.m. Thursday night, Nov. 25, on the I-15 northbound offramp of SR 76. NCFPD crews arrived on the scene to find the vehicle pulled to the right-hand side and on fire.

Earlier that day, NCFPD crews assisted a woman who got out of her car, slipped and was run over by her own vehicle. She was transported by air to Palomar Medical Center with life-threatening injuries.

Wednesday night, Nov. 24, there was a solo vehicle traffic accident on Camino Del Rey which sheared the power line pole and knocked out power to 2635 residents for several hours when SDG&E was able to have the pole and lines fixed.

According to Choi, SDG&E emergency crews were on standby because of the fire danger, so calls to service power lines happened quickly. 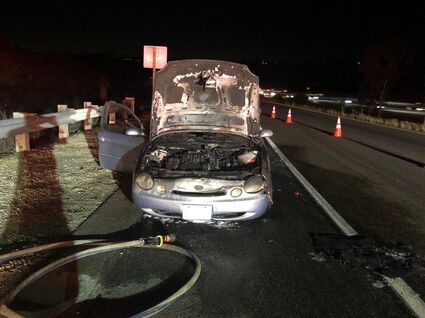 A car pulled over on the SR 76 offramp that caught fire.

Choi said, "We are thankful for our community members for really being careful as it pertains to fires and starting fires and being very conscientious about the dangers of fire in our communities. We didn't have any major fires or vegetation fires. It was a busy Thanksgiving working the front lines from severe medical emergencies to traffic collisions and vehicle fires, but we were able to keep all the fires contained to the vehicles without spreading to vegetation and we're very grateful we didn't have to evacuate our community this Thanksgiving Day during this Santa Ana winds event."

"However, we're not out of the woods yet. We still have one more day for Santa Ana winds and this round of Santa Ana winds has really dried out our fuels and we now have single-digit relative humidity in our district so we are in critical fire danger and we need to remain vigilant."