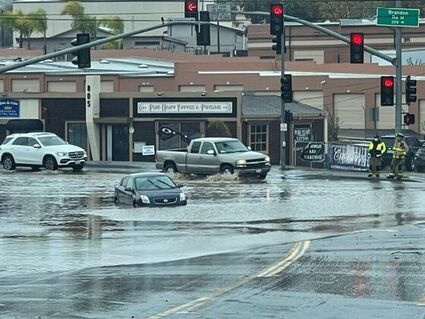 This car was under water at the corner of East Mission and Brandon in Fallbrook during the day Tuesday, December 15, 2021.

The cloudbursts began soaking the region several hours before daybreak Tuesday, starting in its northern reaches and moving rapidly south, according to the National Weather Service.

By late afternoon, when the heaviest rains generated by the unsettled atmospheric system out of the north were tapering off, communities across the

county had gotten anywhere from a few hundredths of an inch to more than 4 1/3 inches of rain, the federal agency reported.

A slew of traffic accidents across the area along with flooding wreaked havoc on traffic and created headaches for drivers Tuesday.

California Highway Patrol reported a tree down in Fallbrook between Alvarado and Gum Tree Lane at 3:42 p.m.

customers in the dark.

In the late morning, a spate of outages left about 10,800 homes and businesses without electrical service across northern San Diego County,

Other precipitation totals included 0.99 of an inch in Alpine and Lemon Grove; 0.97 at San Diego International Airport; 0.93 at SeaWorld; 0.92 in

The storm brought the first measurable rain to the county since October, when the region experienced some mild showers, weather service

The drenched roadways across the region led to a spate of traffic headaches for commuters, according to the California Highway Patrol, including

a flooded stretch of freeway on state Route 94 near College Grove Drive in the Oak Park district of San Diego, shortly before 1 p.m .; large tumbleweeds in traffic lanes on state Route 905 near Interstate 805 in Otay Mesa during the noon hour; a downed tree across De Luz Road at Green Valley Road in Fallbrook, shortly before 12:30 p.m .; and an errant traffic sign on the roadway on northbound Interstate 5, north of Carlsbad Village Drive in Carlsbad in the early afternoon.

Emergency crews had to free several people from damaged vehicles following collisions on rain-drenched area freeways over the day, and rescued

two people who were swept into a surging flood-control channel off Mission Center Road in Mission Valley shortly after 1 p.m., according to the San Diego Fire-Rescue Department.

Public works personnel had to remove fallen trees, boulders -- some described as the size of cars -- and wind-blown debris from roadways across the

county over the day.

The precipitation became increasingly light and scattered through the evening before dwindling out completely by midnight, the weather service

Light rain will be a possibility in San Diego County late Thursday into Friday, with dry and slightly warmer conditions expected to prevail through the weekend, forecasters reported.