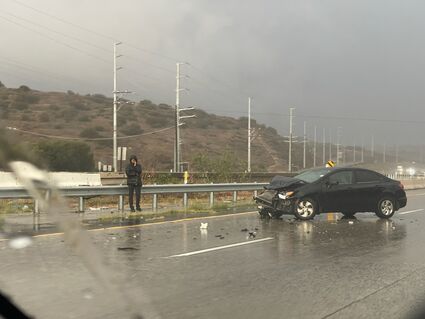 RIVERSIDE  - Heavy rains have developed over the Inland Empire with the arrival of a cold storm that originated from the west coast of Canada, the first of two systems that will canvass the area today and Christmas Day, according to forecasters.

"The rainfall will become widespread overnight through Friday morning, including across the deserts,'' according to a National Weather Service statement. ``Total rainfall amounts were increased, with 2 to 3 inches expected along the coast and valleys, 3 to 6 inches for the mountains and 1 to 2 inches in the deserts.''

For most of western Riverside County, a Flash Flood Watch was in effect through noon Friday, with predictions of "hourly rainfall amounts up to .6 inches,'' the NWS said.

The inclement conditions led to a rash of accidents on inland freeways, including a tractor-trailer going off the side of the Moreno Valley (60) Freeway near Moreno Valley, and a Tesla careening off of Interstate 15 and down an embankment in Corona, according to the California Highway Patrol.

No injuries were reported.

The county Department of Transportation said there was one storm-related closure on Avenida Miravilla, between Orchard and Vineland streets, in Cherry Valley.

The CHP said a rock slide along Highway 243 north of Idyllwild temporarily blocked the northbound lane on the mountain corridor early Thursday afternoon. However, no damage or injuries were reported, and the lane was cleared within a couple of hours.

No significant power outages were reported in Riverside County.

The NWS said the trough of low pressure raking the region into Friday afternoon will be replaced by another, weaker system on Christmas.

"Totals with this system are forecast to be .1 to .3 inches in the valleys, .5 to 1 inch in the mountains, and .1 inch or less across the deserts,'' the Weather Service said. "Snow levels will lower. The snow levels (on) Christmas Day and night will be 4,500 to 5,000 feet, leading to more snow in the mountain communities.''

Forecasters said the region will begin clearing on Sunday morning. However, more stormy weather is likely to roll into the area sometime in the middle of next week.

High temperatures in the Riverside metropolitan area were forecast to be in the mid 50s and lows around 40 from Friday to Sunday.