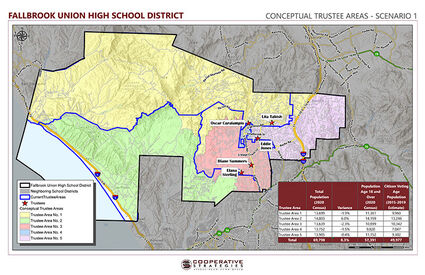 Board members of the Fallbrook Union High School District had a special meeting Friday, Dec. 17, to consider public input and options about redistricting in the five trustee areas for this decade.

Another meeting will be held on Jan. 4 at 4 p.m. in the Bob Burton Performing Arts Center at Fallbrook High School.

The U.S. Census Bureau recently released the data from the 2020 census. For school districts using trustee area elections to elect their governing boards, the release of this data triggered the need to examine, and potentially redraw, the trustee areas based on population changes.

Unlike the process to transition from at-large to trustee area elections, the procedure for adjusting trustee areas following the census data does not require a specific process, Superintendent Ilsa Garza-Gonzales said in the report to the board. However, it must be accomplished by March 1, 2022, she said.

FUHSD moved from an "at-large" Board of Education elections system to a "by-trustee area" with the November 2020 election. Voters now elect their board members based on the specific area in which the voter lives. When the district made this switch, it adopted a boundary map for these trustee areas that was based on the census data available at that time.

The three board members who were elected at large in 2018 to a four-year term were allowed to continue to represent their districts.

On Sept. 27, the school board received a presentation from Janet Mueller of Dannis Woliver Kelley, legal counsel, regarding the redistricting requirement and the anticipated process to fulfill the requirement. On Nov. 8, the district received a presentation from its demographer, Cooperative Strategies, which gave an overview of the results of the 2020 census data, as it pertains to the district's demographics and the need for the district to consider revisions to trustee area boundaries.

Three map scenarios, based on the 2020 Census data, were reviewed at the Dec. 17 meeting with a presentation from Cooperative Strategies, including maps. The maps are available on the district's web page and can also be seen at the Jan. 4 meeting.

One of the main factors for the board to consider is the population variance in each district based on citizens of voting age. Each of the new districts follow closely to the current boundaries, but there are some changes, mostly based on increased population along the area in the district that is east of I-15.

In an interview last week, Garza-Gonzalez explained there were some other important issues to consider because the proposed new boundaries also must follow census tracts.

The 2022 election will be for three incumbents who were elected voters in the previous entire district format. This election, they must live in the trustee area. In one of the three popular map scenarios being considered, incumbent board members Diane Summers and Elana Sterling would need to run against each other, should they both seek re-election.

Here is a look at the five districts:

Trustee Area 1 covers the northern part of the district, from Camp Pendleton to I-15 including most of the outer reaches of Camp Pendleton, De Luz and the area north of East Mission Road. Trustee Lita Tabish lives in the area and the seat will be on the 2022 ballot.

Trustee Area 2 covers the southern part of Camp Pendleton, the area with the most population on the base. There may be no incumbent in the district, depending on which map scenario is adopted. The four-year position will be on the 2022 ballot.

Trustee Area 3 is the southern part of the district on both sides of South Mission Road. Both Summers and Sterling live in the area in map Scenario 2. Garza-Gonzalez said this scenario had some strong support because it results in a lower variance in population balance. The two women live close to one another, but in Scenarios 1 and 2, Sterling would be in Trustee Area 2.

Trustee Area 4 is in downtown Fallbrook on both sides of South Mission Road. It is represented by Oscar Caralampio in an area that has a voting age population that the Census stated was 52.6% Hispanic/Latino. Caralampio was elected in 2020, so his term will extend to 2024.

Trustee Area 5 covers the area East of I-15 and the west side that is south of E. Mission, extending west to the downtown area. It is represented by Eddie Jones since 2020 through 2024.

At the Jan. 4 meeting, the Board will have an opportunity to discuss these potential map revisions, hear from the public, and direct district staff regarding next steps.

The presentation is for information and discussion of potential revisions to the trustee area maps to align with 2020 census data and legal requirements. Future meetings will include action items to address the requirement.

The board report about the Dec. 17 meeting includes the maps that were reviewed. That can be seen at http://web.fuhsd.net/board/20211217/1TRUS.pdf.

There are two regular meetings of the Fallbrook Union High School District next month, on Jan. 10 and Jan. 24.