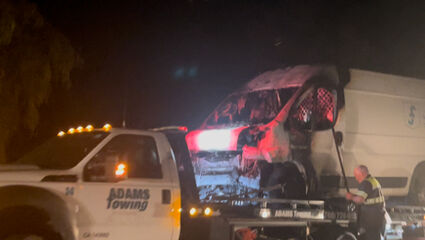 A van is towed after a head-on collision with a sedan on East Mission Rd. Monday evening, Jan. 10, 2022.

A head-on collision between a Sprinter van and a sedan on E. Mission near Via Zancas resulted in an adult male with life threatening injuries and the Sprinter van on fire. The accident was reported at 5:34 pm. Fire crews arrived quickly and were able to contain the fire to the van, according to NCFPD PIO John Choi.

"The accident caused both lanes to be closed as a result of the fire and packaging the adult male for transport to Palomar Hospital.

One lane has been opened but continue to expect traffic delays for the next hour," said Choi.

It was reported to Village News that an off-duty Fallbrook Sheriff's deputy and some unidentified Marines pulled the driver out of the vehicle right before it caught on fire, likely saving his life.

Village News was able to speak with that officer. Fallbrook Deputy Sheriff Benner was off duty but stopped to "help in any way I could." He said, "I was driving in to start my night shift and came upon a head-on collision on East Mission and Via Zancas.

"I stopped and got out of my car. The driver of the van was getting out and I asked him if there was still an occupant in the other car. He said he thought there was.

"I looked in the driver's side window, but because all the airbags were deployed I couldn't see him. So I went to the passenger's side. I could see his lower body. He was hunched over and pinned up against the steering wheel. He was trapped in the driver's seat.

"The first passerby who stopped was really helpful with trying to come up with a solution to get this guy out of the car. I could hear him moaning so I knew he was alive. Someone came up with a tire iron and we were able to break the window and unlock the door, but we weren't able to open it.

It was then that we noticed the fire starting in the engine compartment of the van. My thought was if the van goes up in flames, this car will too since they were connected essentially.

The sedan involved in the head-on collision Monday night, Jan 10, 2022.

"Five or six Marines who were on their way home stopped and assisted us at that point and we were able to pull the driver out of the passenger side. We carried him 150 feet away and at that point, the vehicle was going up in flames.

"The driver had an open wound to his leg. Passersby were stopping, including Deputy McCormick who arrived on the scene and provided first aid, including applying a tourniquet to the man's leg. North County Fire showed up and immediately put him in the ambulance and took him to the hospital."