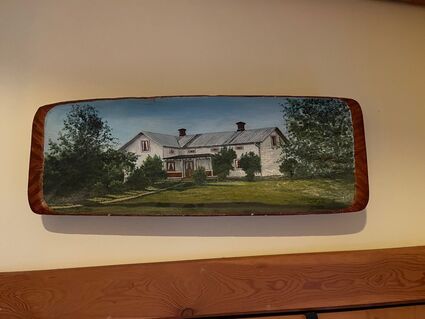 This is a painting of Roger Boddaert's grandparents' home in northern Sweden.

My first visit to Sweden was when my mother and I flew to visit our family in the land of the midnight sun in 1948.

In those days, we departed from the Los Angeles airport and touched down to refuel in Denver, Chicago, New York, Bangor, Maine, Greenland, London, and finally arrived in Stockholm after 24 hours bouncing halfway around the globe as a 6-year-old lad.

Our modern plane in those days was a DC4 and the memorable journey was etched deep within my memory as I peered out the portal window to the earth below.

Once we landed in Stockholm, we had to take the train up to Jämtland, the northern province in Sweden just below the area of Lapland, where the indigenous Sami people live and tend their vast herds of reindeer close to the Arctic circle and the backyard of Santa Claus.

As we headed northward, I listened to the click-clack of the train's wheels while I viewed from the window seat the dense forests, lakes, and rivers, which became a part of my soul's fabric and love for nature and the wild things in the great outdoors.

The train finally reached our destination of Ragunda, and that summer in Sweden was spent living on the farm homestead with my grandparents, working out in the forests, and tending the fields with my granddad.

The summer's days were long with 20 hours of light and it took a while to adjust to the summer solstice. But I felt at home in this raw nature; the forests became my playground, and I was happy.

I spent many more summers and winters there as I entered my teen years in this forest homeland, which sprouted my passion for the great outdoors, educating myself, and learning the wonders of this Nordic landscape.

Food was prepared on a wooden stove, and water was heated to wash the dishes. Some say this was primitive, but you made do with what you had to survive, and life was good in those days and no one complained, for this is just the way things were.

The homestead had the basics to sustain a comfortable lifestyle, with bathing time on Saturday nights. A sizable cast-iron cauldron was set atop a fire to heat the water for bathing out in the old wooden barn.

This barn area was also used as a washroom for clothing, and a corner of this large room was dedicated to my granddad's woodshop. He was a true craftsman and made many of his tools for the farm and out in his forest land.

There was a chicken coop on the second floor of the barn, and it was my chore to gather fresh eggs and bring them into the house daily.

We had to sharpen the tools, especially the scythe, for cutting the hay out in the fields. A large sandstone wheel spun around, and you engaged this stone to turn and sharpen different types of farm tools by foot-power. It was like sitting on a bike, and you peddled it to spin it around and sharpen the farm tools.

When out in the forest with my granddad, he would cut the trees either by ax or a long two-person extended bowsaw. When the trees were down, they were hoisted onto a wooden sled and drawn by horse down to the bank of the river and dumped into the fast-flowing river, which sent the cut logs down to the sawmills located on the Baltic Sea coast.

In this forest land, the main species of trees were pine, fir, and birch. The pine and fir trees were mainly milled for lumber, whereas the birch were mostly harvested and split as firewood. Birchbark was also used in many creative folk arts like weaving baskets, making trays and wooden utensils for home use.

The tiny village of Hammarstrand, with 5,000 folks, is bordered by a flowing river and a majestic waterfall, with a hydroelectric power station generating electricity to this farming community and beyond.

There were open fields created after the cutting and clearing of the forest. So, picture a patchwork-quilt of dense pine forest and then open areas. Play that again in your mind, and you can envision the beautiful landscape that I so admired.

I became familiar with the flora and fauna in the dense forest while hunting for wild strawberries, lingonberries, blueberries, and the elusive cloudberries found only in boggy plateaus. The timing was everything in the discovery of these delectable goodies. It was a way of living, collecting them, making preserves and jellies stored in the earthen root cellars to be used later in the winter months.

The growing season was short but compensated for by the extended daylight, and you had to be alert of any late incoming frost that could hinder your spring plantings.

Nature and its timeclock governed the lives of the Swedes. Still, one had to be prepared for the unexpected in country living and adjust accordingly for the lifestyle is so dependent on the climate.

Summertime was the opportunity of being outside and to explore all that nature had to offer, and it was a rebirth from the long and cold winters.

Dances were hosted in empty barns out in the countryside, and music was played with just an accordion, a violin, and one would dance to the hambo, the two-step, or an old-time Swedish waltz. Oh yes, these were a few of my favorite things.

Long bike rides by the light of the midnight sun with a group of friends and picnics by a lake or a river were a highlight to always look forward to in the summer months.

All of Scandinavia looked forward to dancing around the midsummer pole decorated with birch boughs and hand-picked wildflowers. Crowns of flowers were made for all maidens to wear, and the festivities of joy and happiness were reborn.

And, of course, there would be an array of homemade foods to celebrate the summer's solstice, and midsummer was one of the highlights of the year enjoyed by all Swedes.

But be prepared for, in a flash, the sky could turn grey and bring a summer's rain. When these rains would occur, the aromas of the grasses, wildflowers, and forests would fill the air, and I truly felt that experience from the days I spent growing up in Sweden.

This past December, my wife and I decided to visit her native land and visit family and friends for the holidays.

The landscape is quite different in midwinter, and the snow and cold (-25 degrees Celsius) was a challenge in just getting around for this California lad. But with enough layers of clothing and many cups of tea or coffee, you got used to it.

If you stay tuned, I will share some more of my Swedish tales, for times are changing, and a new generation of Swedes has many challenges ahead. 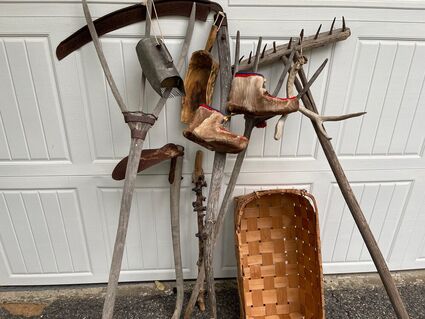 These handmade tools are used on the farm and out in the woods.