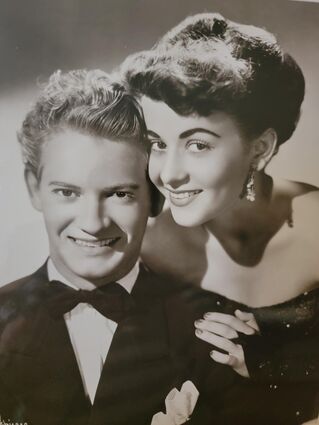 The family moved to Los Angeles during the depression years where work was available. Jimmy's mother, Lucille, was a paralegal and father, Gerstle, was a painter and the family had a car which was not common in those days.

Jimmy excelled as an acrobat and gymnast; in the 1940's you could find Jimmy on top of a human pyramid at Muscle Beach in Santa Monica. Later, in 1947, he was the first AAU champion of the United States in men's tumbling and trampoline. Hollywood noticed his acrobatic talents and he got a small part in the 1948 movie Joan of Arc as a court jester.

In 1949, Abe Saperstein, founder of the Harlem Globetrotters, approached Jimmy

tour. He needed a partner and that's when he was introduced to the love of this

life, Yvonne Baker, a star athlete on the trapeze and trampoline. The two

married in 1951 as Jimmy was being drafted into the Korean conflict.

After two years' service to his country, Jim and Yvonne were right back at their halftime show for the Harlem Globetrotters. They traveled the entire world and performed in almost every free country till 1958 when they decided to start a family. So Yvonne smuggled a monkey out of Ecuador and named him Tarzan. When their son David was born in 1959, the two would fight over toys and someone had to go. Fortunately, they chose to keep David.

Jim was a CPA and in 1964 became VP of the Zahorik Ins. company until his retirement in 1994. Jim was an intense hobbyist; one of his hobbies over the

years was astronomy, not just for star gazing but taking photos of distant

galaxies and, if you're going to do that, you need to build your own

Jim Garner lived an amazing life, he was funny, generous, polite, incredibly smart, and will be dearly missed.