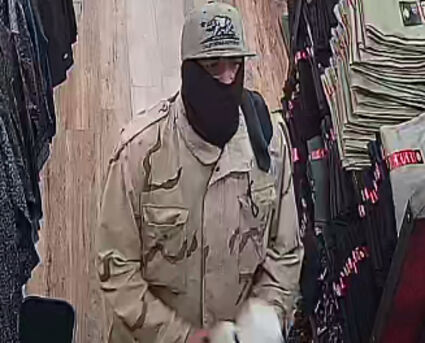 This suspect's picture was taken from C and C Discount Clothing in downtown Fallbrook .

Two Fallbrook businesses were robbed by an armed masked bandit. The first was a T-Mobile, last Friday, Feb. 4, in the early evening, at 840 S. Main Avenue. The next evening, Saturday, Feb. 5, possibly the same bandit, robbed the C&C Discount clothing store. It is assumed that the bandit was on foot. "In both cases, over $400 in cash was stolen from the respective businesses' cash registers," said Detective Steve Ashkar. In both robberies, the suspect showed a handgun to the clerk, according to Fallbrook Sheriff Detective Steven Ashkar. 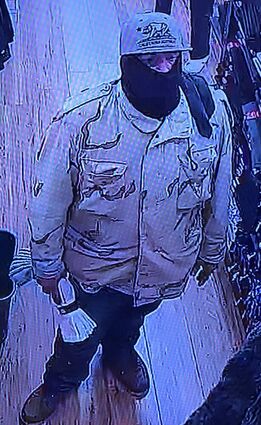 This suspect's picture was taken from C and C Discount Clothing in downtown Fallbrook .

The Sheriff's Department is asking if anyone saw this suspect walking in town around the time of the robberies. They are also requesting assistance from the public in identifying the suspect (or suspects). The Point of Contact will be Detective Steve Ashkar at 760-451-3111 and [email protected]