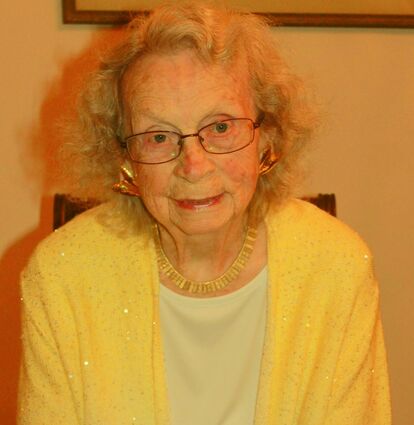 Barbara Taylor, long-time Fallbrook resident and member of Christ the King Lutheran Church, celebrated her 99th birthday on Jan. 22. An avid adventurer, teacher, mother, churchgoer and community member, Taylor has dedicated her life to teaching others and experiencing everything life has to offer.

Born in 1923, Taylor was raised on a dairy cattle ranch in Elk Grove, attending Elk Grove High School where she was the student body secretary, cheerleader, and performer. She earned a Bachelor of Arts degree at the University of the Pacific at 21, as well as a California General Secondary Teaching Credential. After decades of teaching, Taylor returned to school at age 50 to earn her Master's degree in Special Education at San Francisco State University, graduating at 52.

Taylor taught at People's High, an alternative school in Vallejo. In addition to teaching classes to students throughout the day, she was the Director of the School Age Parenting Program, which offered classes to girls who were pregnant. For this work, as well as her time as a board member of the Sonoma Developmental Center, a facility which serves people with developmental disabilities, Taylor was awarded the California Crystal Star Award by Governor Pete Wilson.

Being a teacher, Taylor said, has made her realize the importance of education. "A good education opens many career doors, but more importantly it generates a lifelong thirst for knowledge, and gives a person a clearer understanding of, and a greater tolerance for, other cultures and ways of life."

The most significant parts of Taylor's life, however, have been spent outside of a classroom. The most important event of her life, she said, was her marriage to her husband, Lee Taylor, on Sept. 12, 1943. After their honeymoon near Lake Tahoe, Lee left on a 14-month tour of duty as an ensign in the U.S. Navy. Lee and Barbara Taylor were married 65 years, having two children, three grandchildren, and two great-grandchildren.

Barbara Taylor has spent her life traveling around the world, to 49 states and 19 countries. With a special interest in Native American cultures, she has visited New Mexico and Arizona many times in search of historical and living history sites.

In retirement, Taylor has spent her days serving the community. Lee and Barbara were Bayview District Directors of Lay Speaking for the United Methodist Church for 30 years, and Barbara taught a women's Bible study at Christ the King for 10 years. Taylor is also a member of Delta Kappa Gamma, a teacher's organization, and was named Chi State Area X Outstanding Member in 2011. She has translated books into braille, allowing the further education of those with failing eyesight. And, in Vallejo, Taylor was a member of a senior tap dance troupe called 'Alive and Kicking.'

Although the pandemic has been unlike anything she has ever experienced, Taylor's family made sure she stayed active. Swimming, long drives, and going through family memories are things that kept her busy during the early days of the pandemic. As things began to reopen, Taylor and her family would visit the beach and picnic in the fresh air. 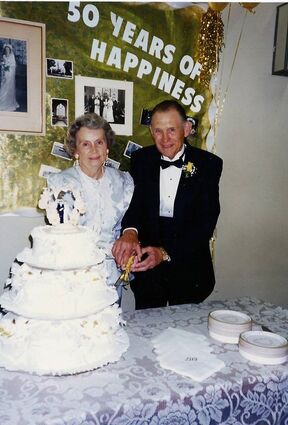 Lee and Barbara Taylor celebrate their 50th anniversary party in 1993.

Taylor is most grateful for "the Lord Jesus Christ and the fact that he died on the Cross and rose from the dead, so that those who believe may live with him forever in Heaven." Her favorite book is the Holy Bible, which she turns to for advice for anything she encounters in life. Her 99th birthday party was held on her son's property on Gavilan Mountain with friends and family.