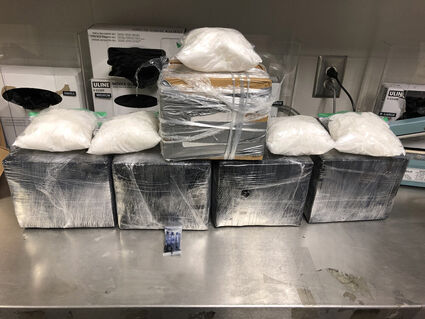 40lbs of methamphetamine were found in a car when the driver was stopped for unsafe driving on I-15, Feb. 8.

After finding 40lbs of methamphetamine during a traffic stop, a suspect was arrested and transported to the Fallbrook Sheriff's Substation, processed and booked into county jail on Tuesday, Feb. 8, according to Fallbrook Sheriff Lt. Aldo Hernandez.

According to Lt. Hernandez, "Corporal Clark conducted a vehicle stop on the vehicle for being in violation of unsafe driving and failure to signal before turning. Corporal Clark contacted the driver and sole occupant of the vehicle. During Corporal Clark's contact and investigation, he located approximately 40lbs of packaged methamphetamine in several boxes and large Ziplock bags inside the vehicle."

This is a breaking story. More information will be reported as it becomes available.