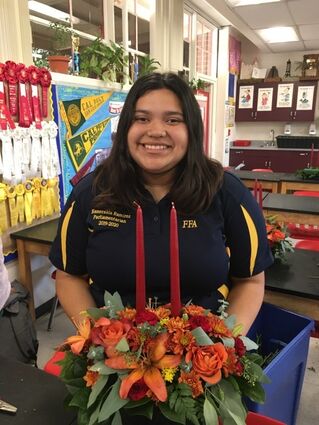 Esmeralda Ramirez Resendiz was passionate about floriculture, and she discovered her love for floral design at the Fallbrook FFA department. Fallbrook Village News/Courtesy Photo

Resendiz had been admitted on Tuesday, Jan. 11, after feeling sick. Doctors ran diagnostics for two days and on Thursday Jan. 13, she was diagnosed with a rare blood disorder called Thrombotic thrombocytopenic purpura, a disorder that causes blood clots to block the flow of oxygen-rich blood to organs. After undergoing platelet transfusions, blood transfusions and a plasma transfusion, her body continued to reject the treatment. On Sunday, the young woman passed away, shocking her loved ones and the Fallbrook community.

Resendiz was an optimistic teenager with a bright future ahead of her. After graduating, Resendiz began taking classes at MiraCosta Community College, and she hoped one day to transfer to Arizona State University with a major in biology.

According to her family, Resendiz was a loving, selfless person who cared deeply for others.

"Esmeralda was the type of person who would defend her beliefs, but kindly," said older sister Lorena Ramirez Jenkins. "She was very generous towards everyone, She was so kind to people and animals, she was a very big animal person."

Resendiz was passionate about animals. She volunteered for some time at the Fallbrook Animal Sanctuary while she was in high school, and her passion for animals extended to her home where she cared for her dogs.

Not only that, Resendiz was a very creative person, she participated in many different art forms.

"She was always painting one day then knitting the next," said Jenkins. "She was very artistic, but she also managed to find time to download and read a new book every other day too, along with school and work."

According to Jenkins, Resendiz had just recently begun her job at the Fallbrook Boys and Girls Club at Live Oak Elementary school in November. She had such a strong impact on the children she worked with, they ended up writing letters to her when she was admitted to the hospital.

Resendiz also had a profound impact on her many friends who adored her, including one of her closest friends of nine years, Emily Brown.

"Esme was basically a sister to me. She was full of light, she lit up every room she walked into," said Brown. "I will forever be blessed for her friendship and getting to know her kind, loving heart. Fallbrook is also blessed to have had such a special and beautiful soul live here."

During high school, Resendiz was also an active member of the Fallbrook FFA before graduating in 2020. She served as the 2019-2020 Chapter Parliamentarian, and she was involved in many different FFA activities, like public speaking and floriculture judging competitions.

"She loved FFA very much, I think it gave her more life in a way, especially floral," said Jenkins. "When she got her FFA jacket with her name on it, she wore it all around the house. She was so excited. She lived for FFA, and all the places she went to with the program."

Fallbrook FFA Floral Advisor Margaret Chapman had Resendiz as a student and coached her on the floriculture judging team for three years. During these three years, Resendiz attended many FFA leadership conferences, traveled for various floral competitions across Southern and Northern California, and she was able to create strong bonds with her classmates and advisors. 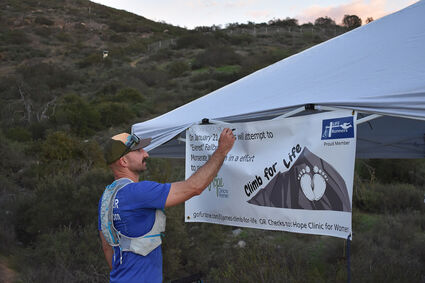 "She was a talented, artistic young lady that excelled in floral design. Outside of class, she was a member of the Floriculture Judging Team competing for three years and working her way up to be one of the top competitors in the program," said Chapman. "She will be remembered as a kind, caring individual with a contagious smile."

Even after her burial, her family was still receiving bouquet after bouquet in honor of Resendiz and her love for floral. The Resendiz family is grateful to all who sent flowers and donated to the GoFundMe account.

"We were so overwhelmed by all the support received," said Jenkins. "She had so many people who cared for her, and it was beautiful to see that she won't be forgotten and she'll live on through people's memories. We're all very thankful for all the love and the support."

Esmeralda Ramirez Resendiz was laid to rest at the Fallbrook Masonic Cemetery on Jan. 28, surrounded by her family and friends.