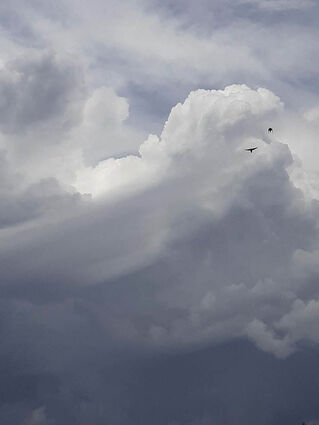 SAN DIEGO (CNS) - Showers could develop as early as Monday night in San Diego County but most likely Tuesday and Wednesday, with snow in the

Coastal areas were expected to get a sea breeze Saturday afternoon but remain dry inland, setting up another chilly night inland.

High temperatures along the coast Saturday were predicted to be 65 to 70 degrees with overnight lows of 42 to 49. Valley highs will be 73 to 78, with

Onshore winds were expected to strengthen through Tuesday, becoming strong and gusty over the mountains and deserts as a cold storm system moves south along the coast, the NWS said.

Periods of showers were expected Tuesday and Wednesday, along with a slight chance of thunderstorms Tuesday night.

After Sunday, temperatures were forecast to fall well below normal, with slow recovery late in the week.

``We can expect to see significant changes by Monday as the major trough deepens over the West,'' forecasters said. The strongest southwest to

west winds may be focused over the mountains and on adjacent desert areas but lower elevations west of the mountains were likely to experience breezy conditions on Tuesday and Wednesday.

As the cold air from western Canada moves in from the north, temperatures and snow levels were predicted to lower significantly. Daytime highs on Wednesday could be 15 to 20 degrees below normal, with lows 10 to 15 degrees below normal by Thursday morning.

Frost, and even some freezing temperatures, may be possible at lower elevations west of the mountains.

The storm was expected to quickly move east Thursday, bringing a return of dry weather with a warming trend through next weekend.

No hazardous marine conditions were expected through Monday afternoon. Strong west-northwest winds over 20 knots and large, choppy seas were

Winds should strengthen Tuesday and Wednesday with gusts near 30 knots over the outer coastal waters. These winds will cause hazardous conditions for small vessels, then diminish late Wednesday into Thursday morning.