All Star Physical Therapy is in the business of helping others 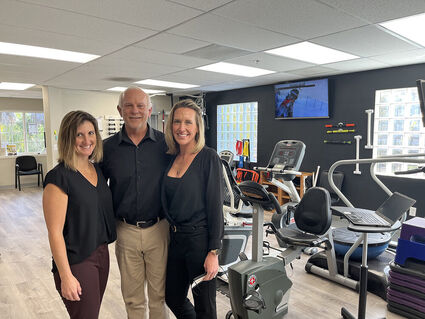 Fallbrook native Bill Atkins has been helping area residents gain strength, mobility and healing for 40 years as a physical therapist, giving clients a second chance for a healthy body.

He's also a respected businessman, one of four owners of All Star Physical Therapy, a company with 30 locations in addition to the office in Fallbrook. However, it hasn't been an easy road to success for Atkins, who said that in 2015 he was given a second chance.

Then disaster. He said he lost the business through a hostile takeover.

"God got me through a rough time," Atkins said. "It was a David vs. Goliath. I lost the business, but I believe God had something better for me."

Atkins opened a new practice in Fallbrook and prospered. He bought into All Star in 2015 and has seen it grow to 31 offices, owned by four equal partners. The offices are in San Diego, Riverside and San Bernardino counties. And when the hospital closed for business in 2014, all its patients in physical therapy were referred to Atkins.

Prior to transferring to college in Long Beach, Atkins was at Biola University when a counselor helped him see the opportunity to become a physical therapist. "I just couldn't walk away from it," he recalled. "It was in my DNA."

The entrepreneurial trait, he said, comes from the Atkins family, who were avocado ranchers, and his uncle owned and operated Atkins Nursery before selling it.

Atkins said he is thankful that he has been able to employ a great group of workers.

"God has given me the energy at age 66 to continue working," he noted. "I believe if God gives you extra years, to use it in a productive way."

The practice sees a variety of clients, from sports injuries to post-operative therapy for back, neck, shoulder, knee, pelvis and hands. Both Temecula Valley and Fallbrook High School athletic teams are also patients.

He noted that the clientele at other All Star offices seemed to be younger than Fallbrook, and that about half his clients are on Medicare.

Akins recently cut back his personal practice from two days a week to one day. The office is run by long-time employees Amanda Lucy and Carrie Loomis. All the staff are skilled therapists, and several have specialties such as hands.

As a physical therapist and orthopedic certified specialist, Atkins has focused on treating musculoskeletal injuries and disorders since 1996.

He noted that a new insurance and Medicare feature called direct access means that Medicare patients can come for an evaluation and treatment without a doctor's referral.

"Insurance carriers have recognized that sometimes it's more efficient and cost effective to have physical therapy instead of surgery or heavy drugs," he said. "There's certainly a place for surgery or medicine, but we strive to give functionality to allow a person to stay active as long as possible."

"We love Fallbrook and believe we offer big company service in a small town," he added.

Atkins is a Fallbrook resident and said his two sons have become physical therapists in the company, working at different locations.

"I believe God gave me the gift of being a physical therapist," Atkins said. "It's a profession that I truly love."

The office is located at 577 E. Elder St, Suite 1. Atkins said his clients say it's difficult to find the office the first time but say it's a gem worthy of returning.