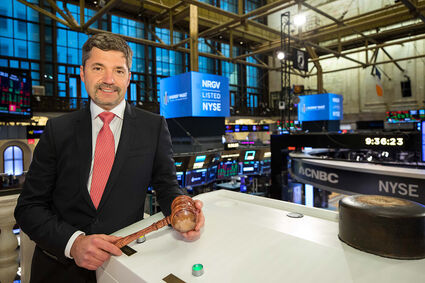 Robert Piconi, who grew up in Fallbrook, holds the gavel which he used to ring the opening bell at the New York Stock Exchange, Feb. 14.

Piconi, who lived in Fallbrook before leaving for college and whose parents still live in Fallbrook, is now the chief executive officer of Energy Vault. The company's initial public offering was part of the NYSE activity Feb. 14, and Piconi was invited to ring the opening bell.

"It was just an amazing day," Piconi said.

Energy Vault stock opened at $11.50 a share. "There's a lot of volatility in that as you go public," Piconi said. "We're definitely going to see some volatility."

That day the Energy Vault stock peaked at $12.50 before dropping to slightly below $10 at the end of the trading session. The stock had a fluctuation of between 20 and 25% during the day.

"We don't really look at our stock in only one day of trading," Piconi said.

"What's really relevant is how we execute and deliver to customers," Piconi said. "That will show up in the stock price."

"It was just an amazing day for our company to go public," Piconi said. "It's just really exciting. We're definitely ready for it."

Piconi lived in Fallbrook from 1975 to 1988. His father was a Navy surgeon when Piconi was born in 1970 at Balboa Naval Hospital in San Diego. The family lived in the Fletcher Hills area of El Cajon until 1975 and moved to Fallbrook after Piconi's father concluded his Navy career at Camp Pendleton. His father retired as a Lieutenant Colonel and opened a private practice on Elder Street after having the building constructed across from Fallbrook Hospital.

After Piconi graduated from St. Augustine in 1988, he went to the University of Notre Dame, although his college studies included a year in Italy. He obtained a bachelor's of science degree in Italian Renaissance Studies and a bachelor's of business administration in Finance and Business Economics. He then attended the Kellogg School of Management at Northwestern University in Evanston, Illinois, and received a master's of business administration degree in Management Strategy Finances and Entrepreneurship.

Amoco was the Midwest affiliate of Standard Oil, and Piconi began his professional career with Amoco. His focus was on energy diversification.

Piconi then worked in the telecommunications industry. "I always wanted to get back to the energy because I saw it as such a critical area," he said.

His reputation drew the attention of Bill Gross, who had plans to start Energy Vault. "They had this new idea for renewable energy storage and he invited me to be the CEO of that company," Piconi said. 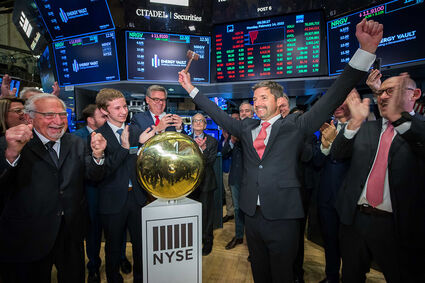 Renewable energy such as solar and wind often generates more power than is used during generation hours, while energy use is often during hours when generation does not occur. Energy Vault uses a gravity and elevator system to store energy and send that energy back to the grid when needed. Piconi is a co-founder of Energy Vault.

"We had to do a lot," Piconi said. "It takes a lot of executing, perseverance, fortitude, humility, and it takes a bit of leadership."

The proper team is also critical. "It really starts with people," Piconi said.

In Piconi's case some of the people who helped him build Energy Vault aren't involved in the company itself. "I leveraged a lot of past experience in large Fortune 100 companies," he said.

"All is very good. We have all the capital we need to fully fund our business plan and then some," Piconi said. "We can focus on execution."