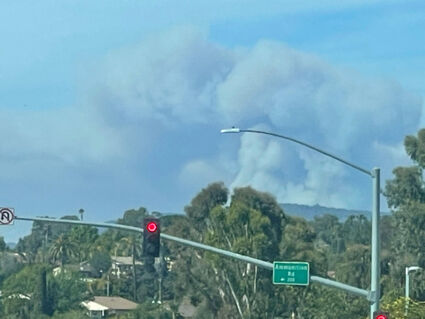 The Jim Fire is seen from the middle of town in Fallbrook. It is in Cleveland National Forest between Lake Elsinore and Trabuco Canyon in Orange County.

LAKE ELSINORE - A wildfire broke out today in the Cleveland National Forest west of Lake Elsinore, charring about 10 acres before crews began working to encircle it.

As of the last update it is currently about 60 acres.

The non-injury blaze was reported shortly before noon along Holy Jim Trail, roughly halfway between Lake Elsinore and Trabuco Canyon in Orange County, according to the U.S. Forest Service.

Eight engine crews and two hand crews deployed to the location and encountered flames in thick vegetation, according to the USFS.

Two Cal Fire air tankers and two water-dropping helicopters were called in to make runs on the brusher.

Federal firefighters were also receiving assistance from Orange County Fire Authority personnel. However, no Riverside County crews were immediately summoned to the area.

There was no immediate word on what might have triggered the blaze.