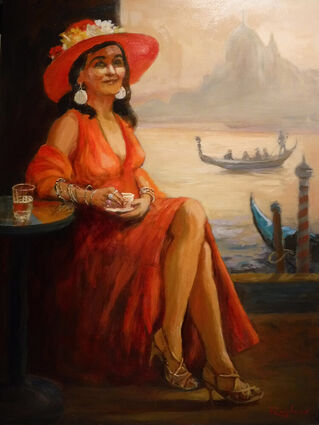 This painting by Jack Ragland is the winner of both the People's Choice and Best of Show awards at the Temecula Valley Art League Competition in February. Village News/Courtesy photo

FALLBROOK – Jack Ragland recently ran across a 10 year old painting of his wife, Marilee, that he had started as a demo painting for an art association workshop but never completed.

He said he didn't like the original painting very much, so he decided to repaint it, making many changes. Since they had returned from a trip to Italy, he decided to set her in romantic Venice with San Marcos in the background and a gondola approaching from the Grand Canal. This time he posed her in the sunlight with her hat shading her eyes and, he said, "featuring her great legs in open-toed heels that were obscured by a table in the first version."

He continued, "I painted the legs in three different angles before I got the look I wanted. I put her arm resting on a little table and put a mirror on it to reflect her bracelets and the little glass of water which reflected the red-orange in her dress." He also repainted the hands and arms several times before he came up with the cup of espresso held in her lap.

He had had her silhouetted against the light creamy sky which made her look very washed out, he said. So he decided to add the dark background on the left to make the reds and oranges pop. He also obscured the architecture in the background to focus on the figure and even put lots of rings on her hands, which she rarely wears, to contrast with the soft material of the dress.

Ragland also explained that the turquoise cover of the gondola was the perfect complement to add zing to the warm colors; "I used to paint things the way they appear. Now I paint things the way I wish they were. It was fun to breathe new life into an old work and make us both feel 10 years younger."

Ragland submitted the 40"x30" oil painting of his wife to the Temecula Valley Art League Competition Feb. 8. The work was awarded the People's Choice Award as well as the judge's Best of Show.