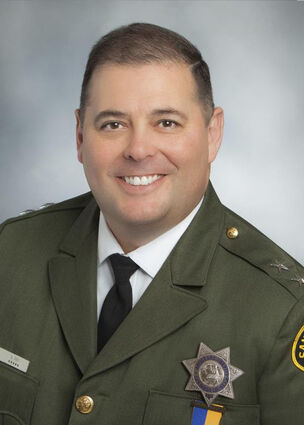 On Tuesday, March 22, the San Diego County Board of Supervisors unanimously voted to select Ray as Interim Sheriff during a special public hearing.

"I am extremely honored and humbled to be appointed as the Interim Sheriff of the San Diego County Sheriff's Department and am grateful to the Board of Supervisors for affording me this opportunity to lead our department," says Ray. "I will continue to serve our communities, expand our partnerships with local advocacy groups, continue the improvements to our jails and keep public safety at the forefront of our daily operations."

Ray currently serves as Assistant Sheriff for the Human Resources and Court Services Bureaus. He brings more than 30 years of law enforcement experience, both in patrol and detentions, to his new role as Interim Sheriff.

Ray joined the Sheriff's Department in August 1991. He is a graduate from the 11th Corrections Academy. In 1995, he graduated from the 28th Regional Law Enforcement Academy.

In 2005, Ray was promoted to sergeant where he worked at the Santee Sheriff's Station, as well as the Division of Inspectional Services. In 2008, he was promoted to the rank of lieutenant and was assigned to the Sheriff's Communications Center, the Lemon Grove Sheriff's Substation and the San Diego Law Enforcement Coordination Center.

Ray was promoted to Captain in 2014 and oversaw the Sheriff's Personnel Division and the Santee Sheriff's Station.

In 2020, Ray was promoted to Assistant Sheriff overseeing the Human Resources and Court Services Bureaus.

Ray's appointment as Interim Sheriff will take effect April 5. At that time, Acting Sheriff Kelly Martinez will resume her duties as Undersheriff.

"I look forward to working with Interim Sheriff Anthony Ray on prioritizing hiring and retention of quality staff, public safety and safety in our jails," says Acting Sheriff Martinez. "It is critical the Sheriff's Department and these priorities continue to move forward and I am confident that will happen under his leadership."

Interim Sheriff Ray will serve in this position until the elected Sheriff takes office in January 2023.