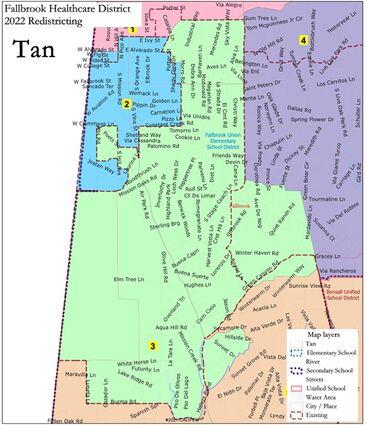 The Tan Map is the one approved for redistricting by Fallbrook Regional Health District. Village News/Courtesy photo

Directors of the Fallbrook Regional Health District approved the "tan map" option for redistricting at the March 9 board meeting. A variation suggested at a March 5 public hearing was considered, but demographers showed it wouldn't work because the population in one of the five sub-districts would be greater than the 10% difference allowed, based on the 2020 census.

The board is governed by directors elected from five geographic areas within the district. Trustees considered numerous maps during the past several months and the final choices were a "p...