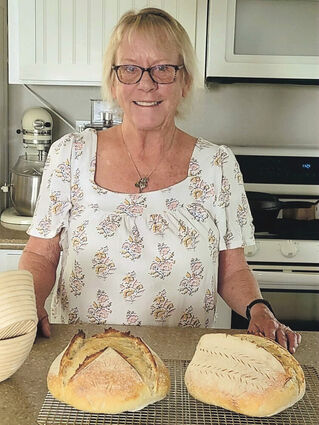 This sourdough tale begins with Edna. Why? Because without Edna, Joni Schork could not bake sourdough bread. Who is this Edna? Edna is the sourdough starter that was developed, and is nourished, by Joni. It is a tradition to name a sourdough starter, and Joni named hers, "Edna," to honor her grandmother.

I had never baked sourdough bread, so when Joni began to describe the process, it was like raising the curtain on a new, avant-garde play. However, having been raised in the San Francisco Bay Area, sourdough bread has been part of my life since I can remember. My first taste of the soft, but slightly chewy marvel was eaten along with crab from the steaming crab pots at Fisherman's Wharf. I certainly know how to appreciate good sourdough, and Joni's sourdough bread is amazing!

Because she has a few years of sourdough bread baking behind her, Joni earned a nickname. Friends and family call her, "The Bread Lady." Within those three words, an entire world resides. When I conducted my interview, I began to realize that there is definitely a vocabulary specific to the sourdough bread-making world.  When Joni began to explain the process, I felt like I was in the presence of a scientist explaining the elements of a new discovery.

In her sparkling, sunshine-drenched kitchen, Joni creates sourdough wonders. Most of her sourdough is baked in the form of bread, but occasionally, it takes the form of robust bagels or soft buns.

Joni explained that once a sourdough starter is created, it needs to be "fed" flour and water on a regular basis to keep it alive. When a starter sits in the refrigerator too long, it eventually dies.

"I probably had three starters that I killed over the years," Joni said.

In 2019, inspired by Instagram photos, Joni fell victim to the lure of sourdough bread baking. In the beginning, she faced many challenges, but through advice from friends, watching cooking shows, and many hours of research, she was able to expand her knowledge, and create delicious sourdough bread.

This brings me to Edna. Sourdough starter is available for purchase online, but Joni didn't take that route. She wanted the satisfaction of developing her own starter.

"I wanted to take it from the very beginning," she explained.

Joni's starter consisted of equal parts organic white flour and water. (Yeast is not added because the mixture creates its own yeast.) She left her starter in a jar on the kitchen counter during the fermentation stage. As the mixture ferments, it increases in volume, which I think is quite mysterious.

Joni explains, "In a week or two you will have a viable starter, but after two or three months it will gain a lot of strength with better baking results." She continued, "The starter gathers bacteria and yeast from the air, so my starter is different from someone else's starter. A 100-year-old starter becomes your own after a while, because it takes in your flour, your water and your air."

Edna will be three years old on May 1, and she already has descendants. Joni has shared Edna with friends who have followed her example and named their starters after their grandmothers.

She mailed starters to friends in other states, and even sent one as far as England. The starters are prepared in a unique manner for mailing. She spreads the starter on a cookie sheet, where it dries, then is ground to a powder in the blender. The powder is packaged and mailed in a small amount – only 15 grams. Edna ends up in the homes of Joni's friends and – in time – these friends will create their own wonderful versions of sourdough.

Sourdough does not require kneading in preparation for baking. After adding flour, water, and salt to the starter, Joni stretches and folds the dough several times.Then, the dough is left to "proof" or rise. The rising time varies greatly due to weather, humidity, and the type of flour used. It usually takes between five to eight hours to rise. After the dough has risen, Joni removes it from the bowl and sets it in a "banneton," which is a special "proofing" basket. The banneton is placed in the refrigerator where it sits for at least three hours. 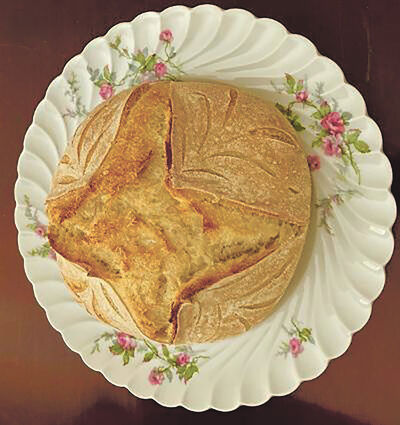 After the dough is removed from the refrigerator, but before it is baked, Joni "scores" the bread dough, creating a design. During this process, she uses a tool called a "lame." To create intricate designs, Joni manipulates a very thin razor blade. Sometimes she will score a design according to seasons – such as trees and stars for Christmas, and hearts for Valentine's Day. Joni is now working on developing more bread designs.

The sourdough bread comes out of the oven with just the right balance of chewy crust and soft interior. It is aromatic and flavorful. It is simply wonderful.

Joni continues with the ancient practice of creating sourdough. (Sourdough is said to have been around since ancient Egypt.) Creating sourdough bread is a time-consuming, complicated pastime. However, Joni says she loves the process. "Every time I bake, I still get excited when I take the lid off the Dutch oven. Baking sourdough is both satisfying and exciting."