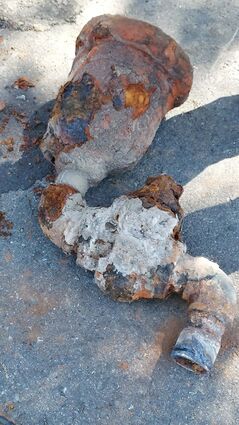 FPUD is replacing aging pipes, valves and other infrastructure, buried under the roads on South Mission and Olive Hill roads.

FALLBROOK – Two major Fallbrook Public Utility District projects will continue to have traffic impacts, likely into the end of March.

A major sewer replacement project on South Mission and Green Canyon roads began March 14 and is targeted for completion by March 29.

Work is being done from 8 a.m. to 4:30 p.m., Monday through Friday, and crews are controlling traffic. One lane of traffic is closed and delays are to be expected during those hours.

Electronic signs notifying commuters of the delays have been positioned near Fallbrook High School and at the intersection of Mission Road and Highway 76.

A recycled-water-valve replacement project is also underway on Olive Hill Road. This necessary project is causing minor traffic impacts. Work there is also being done during the same hours and crews there are directing traffic. This work is also targeted for completion around March 29.

This is a proactive job and crews are working in tight spaces, in the road digging up old manholes to replace the aging valves.

Both jobs are part of the district's proactive much-needed plan to replace aging pipes, valves and other infrastructure, buried under the roads.