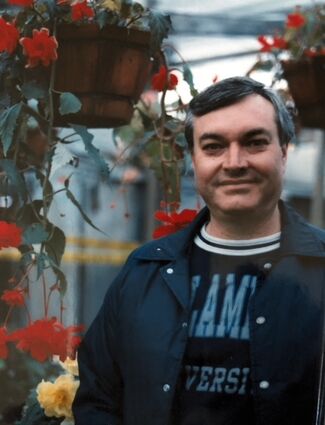 Norman Peter Jarnes, son of Peter Conrad and Lauretta Wilcox Jarnes, was born Oct.12, 1945, in Bemidji, Minnesota, the first of two children. He died March 16, 2022, in Fallbrook, California, at the age of 76.

In 1953, Norman moved with his family when his father was hired to teach religion at Union College in Lincoln, Nebraska. In 1967, Norman graduated with honors from Union College with a B.A. in religion, minors in history and secondary education, and minor equivalents in Biblical Greek and music. He was senior class president and violin concertmaster in the Union College Orchestra.

After graduating from college, he did missionary work in the Philippines and then began his life's work as a publishing editor of theological literature which became widely read by Protestant clergy in the 70's. At the time of his death, he was publishing editor, president and CEO of Worldview Publications (www.worldviewpublications.org).

After his marriage to Barbara Heinselman in 1970, they settled in the Fallbrook area in 1972 and raised three beautiful daughters. A family business, HomeLife Corporation (DBA HomeLife Housekeeping), was started in 1985. Their business later added as co-owners their daughter Grace and her husband, Chris Mathewson.

Norman's spiritual journey led him away from the religious dogma found in many churches but toward an even stronger faith in the "Risen One" whom the world celebrates especially at the Easter season. In his final days, his inclusive view of God's acceptance pervaded his conversations with family and hospital staff. He told one of the doctors that he was not disturbed by his prognosis and quoted John 11:25: "I am the resurrection and the life. He who believes in me will live, even though they die."

He went on to say that this would include more people than one might imagine – even people who never thought they would be included. "If God can forgive those who murdered him," he said, and his voice trailed off, but the message was clear.

He has left behind a grieving family that includes his wife, Barbara; a sister, Ann Randall; three daughters: Kathy Rose, Grace Mathewson, and Laura Gresoro; three sons-in-law: Chris Rose, Chris Mathewson, and Spencer Gresoro; four grandchildren, and many nieces and nephews. He was our rock, our guiding light, and our protector.

Known for his generosity, he was even generous with his patience. He taught his children that people may not always be ready to hear or understand, but by sharing a thoughtful idea or by leading with a simple positive action, they are planting a seed that may germinate and grow in a future they may never witness.

He believed with a faith uncommon, and never counted anyone as a lost cause. Goodnight dear husband, brother, father, grandpa, uncle, and friend. We will see you in the morning!