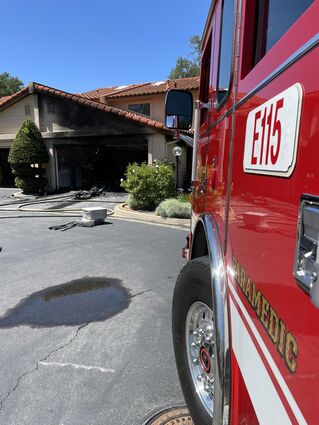 A burned garage in the 1700 block of Tecolote Drive in Fallbrook shows the damage caused by a fire that broke out in the early afternoon hours Friday, April 15.

Firefighters made quick work of a house fire that broke out in a four-plex multi family dwelling in the 1700 block of Tecolote Drive in Fallbrook that was first reported at 12:18 p.m. Friday, April 15.

The fire, which broke out in a center unit, was contained by 12:40 p.m., North County Fire Protection spokesperson Captain John Choi said.

"We were able to contain the fire to the garage," Choi said. "The living area in the home was not affected."

Choi said it appeared the fire started in an attached garage on the front side of the home.

No one was injured in the blaze, Choi said.