Vehicle traffic collision knocks out power to over 1000 residences 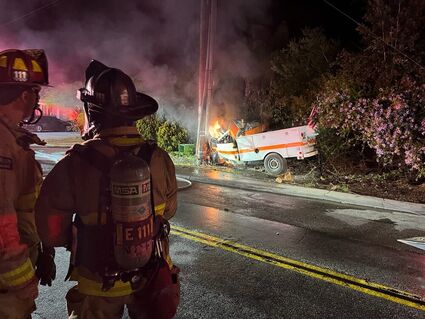 North County Fire Protection District firefighters monitor the situation until SDGE can come and shut off the power.

Monday night at 9:27 pm there was a traffic collision reported on Old Stage Rd. The driver of a car hit multiple parked cars and a power pole, which fell on the vehicle. The downed power pole on the car started a fire, which delayed firefighters from fighting the fire until SDGE could mitigate the downed power pole and active power lines.

It was reported that the driver attempted to flee and was detained by bystanders. According to NCFPD PIO John Choi, the driver was transported with major injuries to a local trauma center.

The area of Old Stage Rd was closed between Fallbrook St and E Avi...